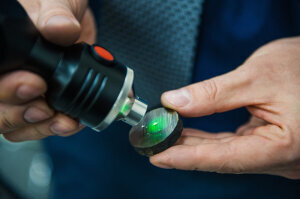 Russian researchers have developed
a new technology for producing magnetic
materials used in MR scanners at
a lower cost
An engineering solution that can produce magnetic materials at a lower cost may reduce the expenses of MR imaging devices and scans.

Researchers at the National University of Science and Technology MISiS in Russia have collaborated with the production association, Magneton, to develop a technology for manufacturing low-cost hard magnetic materials and permanent magnets that, according to their estimates, will cut the current cost of MR analysis in half.

"The use of new soft magnetic materials has allowed us to develop magnetic conductors for a magnetic system of the scanner with low loss, while maintaining high values of magnetization saturation (more than 2T),” Evgeny Gorelikov, the project head, candidate in political sciences and deputy director of the NUST MISiS Engineering Center for Industrial Technologies, said in a statement. “All this allowed us to design and reduce the weight of permanent magnets used in the design of magnetic systems by almost 30 percent, and thus reduce the cost of the devices.”

MR scanners that utilize superconducting magnets provide the highest image resolution, but are difficult to design and expensive to operate, making them difficult to afford, particularly in Russia. A single analysis with an MR scanner costs between 4,000-12,000 rubles ($70.84-$212.52) depending on the body part scanned and the clinic.

The solution is a prototype of an economically- and environmentally-friendly low-field MR imaging prototype that produces magnets using alloys of rare, domestic earth metals and their compounds, including ones obtained in the processing of industrial waste magnetic production.

The use of these materials has decreased cost 1.5 times. In addition, the new MR technology does not require cryogenic technology, liquid nitrogen, helium fluid and water for cooling to run, compared to those with superconducting magnets or electromagnets.

It also can be powered with renewable energy sources, such as solar panels, with a consumption of less than 1 kilowatt.

Researchers at the University of York in the U.K. recently developed their own approach for lowering the MR costs by magnetizing molecules found naturally in the body to increase their visualization and enable them to be detected using smaller, cheaper magnets or even the earth’s magnetic field, eliminating the need for superconducting magnets.

The MR technology operates with low magnetic fields, which can cover most common diagnostic tests and are preferred by small clinics and private practice physicians. Large providers will also take interest, buying the scanners as second and third installations for mass screenings.

Researchers hope that their project will create a competitive industry with lower production costs for magnetic materials and a basis for the autonomous production of new generation, low magnetic field MR scanners in Russia.

NUST MISiS did not respond to a request for comment.