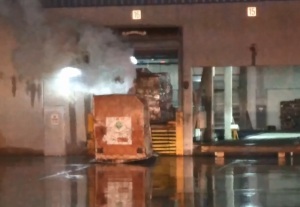 When a leak like this occurs, the colorless, odorless gas can cause severe frostbite and burns as well as asphyxiation or dizziness.

Personnel immediately moved the scanner by forklift outside, following the incident. Port Authority Police Department emergency services and fire crews responded to the scene with the spill cleared at around 9:30 p.m.

Though MR leakages may be rare, the potential for mishaps in general with MR scanners are common, posing harm to patients, staff members and any other individual within the vicinity. A veterinary hospital in New Jersey, for instance, experienced such an incident in March 2015 when an MR machine exploded, causing a portion of the roof to collapse and putting one man in the hospital in critical condition.

A man in India also died recently in another incident when a scanner pulled him up, along with an oxygen tank he was holding, pinning his hand and trapping him inside where he succumbed to over-inhalation of oxygen.

No injuries were reported in this incident.