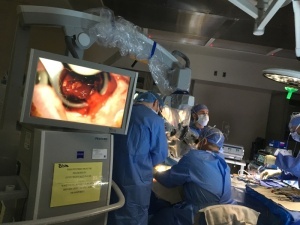 The sun has just started to rise behind the thick clouds blanketing upper Manhattan on a recent morning as Dr. Joshua Bederson begins his day at Mount Sinai.

As the Mount Sinai Health System’s head of neurosurgery, Bederson is the captain of the figurative aircraft that is the department of 30 full-time faculty members, 40 residents and 70 advanced practitioners located across the five boroughs of New York City. It’s a metaphor that the amateur pilot uses often to describe his early adoption of the cutting-edge augmented and virtual reality technology that has revolutionized the complex brain surgeries Bederson and his colleagues perform, helping them plan the approach and avoid damaging critical structures adjacent to the tumors they remove and the aneurysms they repair.

The new technology includes a program called Surgical Theater, which uses CT and MR scans to create a 3-D reconstruction of the patient’s anatomy, and navigation software from Brainlab, giving Bederson what feel like superpowers to see through tissues and around corners while piloting his instruments through the brain.

“In aviation, when you’re flying in clouds, you don’t see the mountain or the runway, but you take information from the navigation equipment,” explains Bederson, who has the calm demeanor of someone you would want in the cockpit — or wielding a scalpel for several hours. “You overlay that on your knowledge of the local geography, which is similar to your knowledge of neuroanatomy. And you go back and forth between the instruments, the maps and so on, in an integrative process. In very advanced airplanes, some of that information is projected onto the windscreen in a heads-up display. The advantage of that is you don’t need to stop flying the plane in order to get the information.”

Surgeons at Mount Sinai can also use the DICOM images and Surgical Theater technology to create 360-degree virtual models of their patients’ brains and use an Oculus headset to do a “run through” of the surgery, explains Parth Kamdar, a VR program lead at Surgical Theater who supports the utilization of the technology at the hospital.

“Some doctors say they feel like they already did the surgery,” Kamdar says.

Meeting of the minds
After some work in the quiet of his office, Bederson’s morning begins in earnest with a 7 a.m. educational conference to go over the department’s current cases, including the three surgeries on his plate that day, all resections of pituitary gland tumors pressing on each patient’s optic nerve.
1(current)
2
3
4