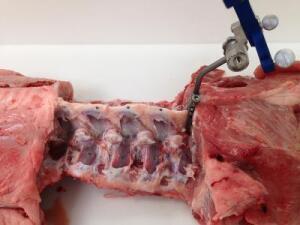 Researchers from the Thayer School of Engineering and the Geisel School of Medicine at Dartmouth College have developed an AI-powered real-time optical tracking system to guide surgeons in 3D during operations.

“If the surgeon is not using an accurate tool for navigation, he or she could use image data that really doesn't represent the surgical field accurately enough for them to execute what they need to do,” Keith D. Paulsen, Robert A. Pritzker professor of biomedical engineering at Thayer School of Engineering at Dartmouth,” told HCB News. “Without the accurate navigation and image data, you could miscalculate and cut a nerve or a blood vessel that is in the surgical field. Or, if it's an implant, you might not get it in the way you really want to.”

CT and MR scans used prior to surgery can be rendered less reliable due to tissue and bone blocking clear paths to problem areas and moving during procedures.

The intraoperative stereovision system utilizes a complex software algorithm and a surgical microscope equipped with two cameras to render the real-time images on a monitor. Use of the system requires no additional radiation and eliminates the challenge of marking areas on a patient’s spine to match up or co-register with pre-operative CT scans.

Researchers tested its efficiency when operating on spines of pigs which are more or less of similar geometry and have comparable spatial relationships to those of humans. They have since converted it into handheld wand that can be passed over the surgical area.

The mapping technology, which has been used in brain and breast surgery, is expected to save up to 30 minutes in procedure time, producing accurate guidance on where implants or surgical tools should go.

It also could be used in minimally invasive surgery and save in processing times and costs compared to conventional technology.

“Today either surgeons are not going through the pre-registration process to match up to a preoperative CT scan because it's very time intensive, or they are using very expensive technology like an interoperative CT scan on an ongoing basis during the surgery; an O Arm from Medtronic; or fluoroscopy. Our tool is much less expensive to build and operate,” said Paulsen.

The researchers maintain that it could take several years before the system is utilized in human spinal surgery.

The findings were published in the journal, Operative Neurosurgery.