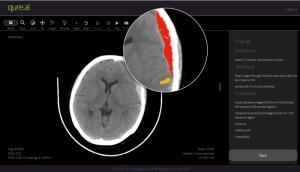 Qure.ai has released a new
technology that can read and
identify brain abnormalities from CT
scans in less than 10 seconds
Bleeds and fractures occurring to the brain can now be detected with a 10-second reading of a head CT scan by Qure.ai’s new technology.

The Indian-based startup’s AI-powered solution rapidly scans and identifies brain abnormalities, alerting neurosurgeons or emergency room physicians to patients who require immediate attention. The release of the technology marks the enterprise’s introduction into the world of head and brain CT scan interpretation.

“The main advantage for radiologists is that AI enables automated prioritization or highlighting of patients who need urgent attention,” Pooja Rao, R&D head and co-founder of Qure.ai, told HCB News. “The radiology work list can often be long, especially at night, and this tool can help direct radiologists’ attention to critical cases. The highlighting and quantification of abnormalities both save time for the radiologist.”

Head scan readings can often be delayed when radiologists are not immediately available or have many pending scans, putting patients who suffer strokes or other head-related trauma at greater risk.

Trained with a collection of 313,318 anonymized head CT scans and corresponding clinical reports, the technology can localize brain regions and quantify areas of bleeding in fully-automated reports.

The designers of the technology tested the efficiency of its algorithms on 21,095 patient scans. They then clinically validated their use on 491 CT scans, comparing the results to those of three senior radiologists, one of whom is Norbert G. Campeau, a senior neuro-radiologist in the Mayo Clinic's Department of Radiology and a co-author of the study.

Qure.ai found its technology to be more than 95 percent accurate in identifying abnormalities, claiming that such technology will help radiologists and providers prioritize care, make faster diagnoses and reduce costs.

The release of the solution further illustrates the growth of AI as a hotbed of experimentation, particularly for image interpretation.

Researchers at Ohio State University Wexner Medical Center for instance recently developed their own AI-powered tool for detecting critical findings on CT scans, as did another Indian-based start-up called ParallelDots Inc., which created a software for detecting brain hemorrhages on CT images.

Rao warns that despite its success, the technology is meant to assist but not replace radiologists.

Data sets of 491 AI-interpreted head CT scans made by the company, as well as the corresponding interpretations of the three radiologists, are publicly available for download.