A look into the medical device design process

A look into the medical device design process 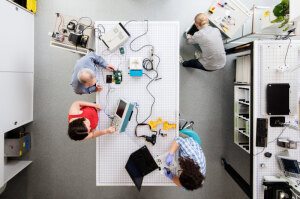 The process of designing the medical devices that clinicians use every day begins in the same places where these products eventually end up.

Companies that contract with OEMs to take on the job of designing surgical tools, patient monitors and imaging equipment, or the internal design departments of the OEMs themselves, all start the design process by observing procedures or the day-to-day workings of a hospital room.

According to Dustin Boutet, the principal interaction designer for EPAM Continuum, which partners with medical device companies on the design process, this can be called a “human-centered approach” to product design.

“So much of what we do needs to be adaptive for either audience,” said Boutet.

For example, EPAM Continuum worked on the design of Mindray’s V Series patient monitoring system a few years ago, observing both caregivers and patients.

Susan McDonald, a senior human factors engineer for Ximedica, which also works with companies to design such products as injection devices, pumps and surgical robots based on either concepts or fully-fleshed-out plans, is on the research and strategy team that is credentialed and trained in such things as HIPAA and how to properly navigate a sterile zone.

“We do our best to record and be sort of flies on the wall,” McDonald said. “We look at lighting, temperature, how many different roles are in the room, is the room crowded, how much communication is required between clinicians. If the device has an alarm and the room has a lot of ambient noise, we might add a more visual or tactile alarm. We then present our findings to the design team and the client and say how they might affect the design.”

Farm, a Flex Company – which has worked with such large medical manufacturers as Covidien, Hologic and TransMedics – collaborated with startup NinePoint Medical on the NvisionVLE Imaging System, which allows clinicians to more precisely evaluate the tissue microstructure of the esophagus during a standard endoscopy procedure, by observing the procedures in several GI suites.

"We developed the cart system that adapts to its environment and its users" said Dan O'Sullivan, senior director of design at Farm, a Flex company. "We created features that improved the workflow. The system has a display for the physicians and a control tablet for the tech. There are little things that make their job easier as well, like a simple hook to hang the catheter packaging during setup."
1(current)
2
3