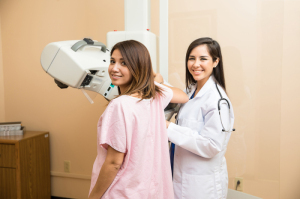 Starting in 2019, women must, by law, be directed to their breast imaging health care provider for information on dense breast tissue and the risks behind it. The law is the first of its kind for any state, with previous laws requiring patients to be directed only to their referring physicians.

"This means that women in Illinois are being encouraged to have a conversation with the expert, the radiologist, the doctor who determined their breast density, and dialog about the options for supplemental screening,” Patti Beyer, patient advocate and founder of the Illinois Breast Density Initiative, said in a statement.

Approximately 40 percent of women aged 40 and over have dense breasts, a risk that makes them 4-6 times more likely to develop breast cancer and one that obscures the presence of tumors during mammograms. Women with dense breasts are encouraged to seek out supplemental screenings, such as ultrasound or breast MR.

Yet, even states that have enacted legislation on the subject have not created a single national reporting standard, with laws varying in depth and degree for notification to the point where some do not actually require that women be informed of their own breast density, but rather general information on the topic.

Such differences have sparked calls for a uniform approach with proposed examples including the Breast Density and Mammography Reporting Act of 2017, which has been introduced in both the Senate and the House. In addition, the FDA expects to publish proposed amendments to the Mammography Quality Standards Act (MQSA) regulations for notice or comment that will steer the conversation in that direction.

Another disagreement created from the lack of a standardized view on how to address the subject is the number of states considered to have passed breast notification laws. While advocacy groups, such as Are You Dense, Inc., consider Illinois to be the 36th state, others like DenseBreast-info.org consider it to be the 35th as it does not recognize the law in Indiana.

The passage of the law follows others passed this year in Utah, Washington and Florida, as well as Wisconsin, the most recent state to enact such a law. The addition of Illinois raises the percentage of women across the U.S. who must be notified in some form of their breast density following a mammogram to 88 percent.
1(current)
2