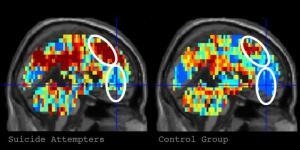 The five-year, $3.8 million grant will fund additional research to build upon the work of Marcel Just and David A. Brent in identifying brain activation patterns in young adults that indicate contemplation of suicidal thoughts.

"The cornerstone of this project is our recent ability to identify what concept a person is thinking about based on its accompanying brain activation pattern or neural signature," said Just, the D.O. Hebb University Professor of Psychology in Carnegie Mellon University’s Dietrich College of Humanities and Social Sciences, in a statement. "We were previously able to obtain consistent neural signatures to determine whether someone was thinking about objects like a banana or a hammer by examining their fMR brain activation patterns. But now we are able to tell whether someone is thinking about 'trouble' or 'death' in an unusual way.”

Deemed the Predicting Risk Imaging Suicidal Minds (PRISM) project, the initiative assesses the difference between suicidal and non-suicidal individuals based on positive and negative words or concepts they think about in relation to suicide. Machine learning techniques are deployed to identify neural signatures of suicidal ideation and behavior, thereby establishing neurocognitive markers that may indicate if someone is contemplating or is likely to attempt suicide.

The funding will enable Just and Brent to apply their technology to a larger sample of patients, building on its previous study in 2017, which utilized functional MR imaging (fMRI) to depict alterations in brain patterns in response to different words, such as death, cruelty, and trouble. It also will include a variety of comparison patients with other psychiatric conditions.

If successful in a preliminary setting, the work will by applied to clinical practice where Just and Brent expect it to improve detection and monitoring of suicidal risk as well as comprehension of shifts in thinking and feelings related to suicides in patients. In addition, the research may help clinicians develop personalized treatment strategies for suicidal patients based on altered patterns of thinking and feeling that more precisely and effectively reduce the risk of suicide.

"Suicide is the second leading cause of death among young adults in the U.S., and current assessment methods rely entirely on patients self-reporting and doctors' observations," said Brent, who holds an endowed chair at the University of Pittsburgh School of Medicine, in a statement. "Any new inroads to better diagnosis and treatment have the potential to save lives."

The findings in 2017 were published in the journal, Nature Human Behavior.