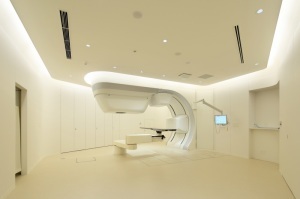 The three-treatment room system delivered its first bout of treatment Tuesday at the Osaka Heavy Ion Therapy Center in Japan, becoming one of the few locations in the world to offer the advanced form of particle therapy.

The system is spatially designed with two treatment rooms that feature vertical and horizontal ports as well as another with horizontal and oblique ports, and is equipped with scanning technology for treating certain forms of cancer and real-time image gating to track the movement of organs during respiration. It also utilizes imaging data and calculates appropriate dose to establish the most suitable, patient-specific treatment plans.

As part of its strategy, the company plans to provide products with greater performance and added value, an example of which includes its agreement last month to install its first compact single-room proton therapy system at Shonan Kamakura Advanced Medical Center.

“We have recently seen a trend for more one-room opportunities in the market,” Itami told HCB News at the time. “Hitachi will continue to support the multi-room system, as there are still such opportunities out there, but our focus on providing the best one-room solution where not just the technology is important but also the size and cost of the system, will increase.”

In addition to the system in Osaka, Hitachi recently won its first overseas heavy ion project in Taiwan earlier this spring, and has several other projects in the works, including a plan to create a single room solution and a hybrid system combining the capabilities of proton and carbon therapy.

The heavy ion system is not CE-marked or FDA-cleared at this time. Heavy ion beam therapy is not available in the U.S., primarily due to unavailability of reimbursement.