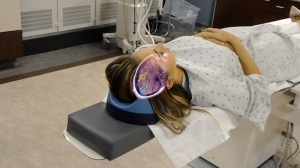 Rendering 2D, 3D and 4D images interactively, the system equips clinicians with the ability to see the patient and inside the patient simultaneously, establishing development of more accurate surgical plans.

“Everything is contained in that headset,” Dr. Steve Cvetko, head of research and development at Novarad, and co-creator of OpenSight, told HCB News. “There are no wires and you have complete freedom of movement. It runs Windows 10 and you can use it with any other Windows application; technically, you could bring up your EMR alongside other programs and do several things at once. It’s a very open platform that way.”

For OpenSight users with the Microsoft HoloLens headset, this means being able to see 3D patient images in augmented reality, as well as the patient at the same time. It also avoids the disorientation associated with virtual reality by allowing users to continue seeing the real world.

OpenSight images are co-localized to the patient, providing a greater understanding of anatomic relationships and highlighting relevant anatomy and critical structures for clinicians to avoid. Surgery is further enhanced by the system’s positioning of virtual tools and guidance systems, as well as the availability of multiple headsets to allow users to train less experienced residents. In addition, the option of a teaching software for medical students is available, allowing them to practice performing virtual dissections on cadavers.

“Using the example of operating on rib fractures, a surgeon would use the HoloLens to guide the incision to fix the fracture,” Cvetko said. “The incision would be more accurate, smaller, and the operation could go quicker. And all of that would mean that the patient would experience a quicker recovery time.”