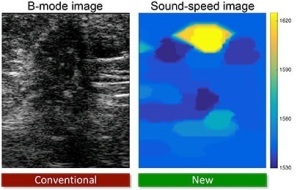 The technique takes into account
both intensity and speed of
sound waves
A new technique may offer higher quality in ultrasound imaging, leading to greater ease of interpretation.

Researchers at ETH Zurich have developed a new approach for enhancing contrast in ultrasound scans, enabling clinicians to more efficiently differentiate benign breast tumors from malignant ones in ultrasound images, which are more difficult to interpret, compared to X-ray and MR.

“MR and X-ray use different forms of electromagnetic waves, which can both travel through the tissue in relatively straight paths, while keeping their properties to some extent,” Orçun Göksel, assistant professor at ETH Zurich and director of the study, told HCB News. “In contrast, ultrasound is based on acoustic waves, which are mechanical waves traveling through the tissue. Before reflecting off some tissue location as an echo, such waves travel physically through large sections of different tissue layers, which affect and perturb this traveling wave. Since we do not know exactly what the sound goes through during its travel, we cannot take into account any such perturbations and unknowns, which appear as noise in the images, degrading their quality.”

Such perturbations refer to varying speeds of the echo in different tissues, slight changes in direction and bending of the waves, and the different ways in which they are reflected off organs.

The approach by Göksel and his team takes into account both echo duration and intensity, utilizing newly developed prototype technology to analyze echoes of sound waves. The device then reconstructs a 3D echograph, with speed of the sound wave determined by the density and rigidity of the tissues, as sound travels three percent faster on average in malignant tumors than healthy tissue and 1.5 percent faster than in benign tumors.

“In taking multiple ultrasound images of the same tissue by electronically ‘steering’ the imaging direction, we deduce the speed of sound – much like the sense of depth, thanks to stereoscopic view with two eyes versus one. This does not require a hardware add-on, and can be accomplished only as a software solution, given that the used ultrasound machine provides access to some low-level signal and data information.

Technology includes a compact, handheld ultrasound probe for emitting sound waves and processing software that enables the technique to be used with any piece of equipment. While the team’s earlier work required the use of older reflector-based technology with hardware add-ons, its most recent is focused on the technical development of a reflector-free technology.
1(current)
2