The surprising link between MR helium leaks and iPhone shutdowns 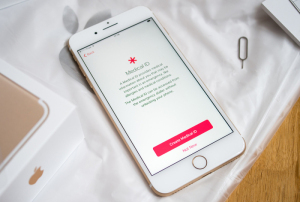 An MR helium gas leak caused 40
iPhones to malfunction
MR helium leaks can be disastrous for hospitals and imaging facilities, potentially causing magnets to quench and putting machines out of commission for days and even weeks... But did you know they may also shut down iPhones?

That’s what Erik Woolridge learned soon after receiving word that several staff members at Morris Hospital near Chicago were unable to use their smartphones and Apple Watches.

“My immediate thought was that the MR must have emitted some sort of EMP, in which case we could be in a lot of trouble,” Woolridge, a systems specialist at Morris Hospital, recalled in a thorough Reddit post.

The possibility of an electromagnetic pulse was quickly ruled out, as such an event would have also affected the medical equipment in the facility, which was still up and running. In fact, only Apple devices were affected with a total of 40 not working properly, while Android devices continued to function properly.

“The behavior of the devices was pretty odd. Most of them were completely dead,” said Wooldridge. “I plugged them in to the wall and had no indication that the device was charging. The other devices that were powering on seemed to have issues with the cellular radio. The WiFi connection was consistent and fast, but cellular was very hit or miss.”

Woolridge conversed with several other system administrators and finally figured out the problem: a liquid helium leak – derived from the ramping of a magnet for the hospital’s new GE Healthcare MR scanner.

Approximately 120 liters of liquid helium was vented over five hours, with the liquid converting into gas and spreading throughout the hospital due to the MR room sharing air with most of or possibly the entire facility. Precisely how much seeped both inside and out is unknown, with helium expanding 750 times more when converted from a liquid to a gas, adding up to 90,000 liters in total for this instance.

All devices affected were iPhone models 6 and higher and Apple Watch Series 0 and up. One iPhone 5 in the building did not exhibit any negative effects due to the leak. Though signs of recovery were seen following the incident, full functionality did not return.

“One iPhone had severe service issues after the incident, and some of the [Apple Watches] remained on, but the touch screens weren’t working (even after several days),” said Woolridge.

But why did these specific devices malfunction under helium exposure to begin with? Investigating the matter further, Woolridge determined that the issue lay in the SiT512, a 32 kHz microelectronic medical system (MEMS) timing oscillator that was recently incorporated by Apple to act as a component within iPhones and Apple Watches to replace the traditional quartz oscillators.
1(current)
2