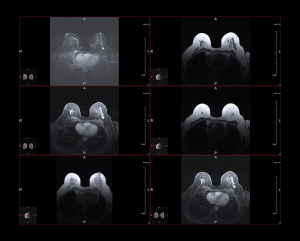 In another deep learning advance, researchers have been able to use a relatively small data set to teach an artificial intelligence application to deliver value-added imaging diagnostics. In a paper published in the Journal of Digital Imaging (JDI), the study team trained a program to predict a patient’s chances of developing breast cancer axillary lymph node metastases.

The team compiled only 275 auxiliary lymph nodes for the study, split about evenly for positive and negative findings. Based on code that was developed in the study, a mean five-fold cross-validation prediction accuracy of 84.3 percent was realized. Ha said that recent advancements in GPU computing technology had enabled the development of artificial networks that can see patterns and features in digital images. This enables an AI application to classify images, which was applied in the study to sort metastatic and non-metastatic lymph nodes.

“The goal of the study is to utilize digital data in MR images to discern metastatic lymph nodes, with an ultimate future goal to minimize axillary surgeries in patients who may not benefit,” explained Ha.

He stressed that theirs was a feasibility study showing that it is possible to apply convolutional neural networks (CNN) to predict metastasis in lymph nodes. The team will next gather a larger AI training data set to improve their CNN algorithm further, to ultimately use it in a prospective clinical trial, according to Ha.

In the study discussion, the team noted that this was the first time that AI had been applied for predicting axillary lymph node metastasis. The study also noted that prior MR axilla studies alone were able to achieve 75 percent, compared to the 84 percent accuracy by the AI program.

“Applying deep machine learning using a CNN-based algorithm in our study, we were able to generate reasonable diagnostic performance in predicting axillary lymph node metastasis, even with a small data set,” concluded the authors. “Larger data set will likely improve our prediction model and can potentially be a non-invasive alternative to core needle biopsy and even sentinel lymph node evaluation.

The study was first posted online by JDI in April 2018 and published in the journal last month, December 2018.