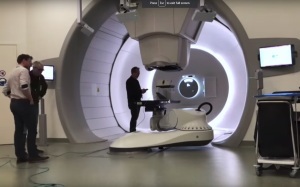 Researchers at the Dutch-based institute performed the practice in an IBA gantry treatment room, marking a step forward for IBA and its medical and research partners in integrating Flash irradiation as a clinical treatment.

“Being the first proton therapy center that has treated patients in The Netherlands, we have the vision that the clinical introduction of new and emerging radiation technologies should be more evidence-based,” said Hans Langendijk, chair of radiation oncology at UMCG, in a statement. “As the pioneer of the model-based approach for selecting patients for proton therapy in The Netherlands, we look forward to better understand the radiobiological effect of Flash irradiation and predict the benefits and outcomes of Flash therapy for patients.”

A noninvasive radiotherapy technique, Flash irradiation delivers high doses at ultra-high speeds in less than one second, saving time on, and prolonged exposure to, radiation during procedures. The phenomenon requires a dose superior to 8 Gy and a dose rate above 33 Gy/sec, compared to conventional dose rates for radiotherapy which are 1-7 cGy/sec. It is theorized that the high dose rate depletes the oxygen within tissues, rendering healthy ones radioresistant and allowing dose to reach levels that destroy tumor tissues, even in high hypoxia, with almost no impact on healthy surrounding tissue.

The demonstration, which took place on March 1, consisted of several Flash irradiations delivered at the isocenter of one of the facility’s two gantry treatment rooms. Using IBA Proteus solution, researchers obtained positive results that exceed the conditions required for the Flash effect with a dose rate up to 200 Gy/sec.

It follows a number of events revolving around the practice, including funding for two accelerator-based projects in X-ray and proton therapy at the Department of Energy’s SLAC National Accelerator Laboratory and Stanford University, respectively; and the launch of Varian’s ProBeam 360° platform, which is expected to open access to flash therapy and other potential next-generation treatments.

“We are excited about the recent results obtained in Groningen, demonstrating IBA’s technology leadership in Flash therapy research, a novel technique that has the potential to change the way patients are treated,” said Olivier Legrain, chief executive officer at IBA, in a statement. "Building on a unique and open culture of collaborative innovation, IBA continues its commitment to further develop Flash therapy by partnering with the largest and most experienced user community in studying the radiobiology of proton Flash irradiation and help our clinical partners move faster to bring value to the clinic.”