Surgery gets a little more futuristic with single-incision robotic procedures 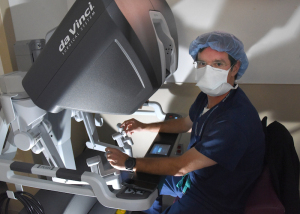 In November, Dr. Jeffrey Cadeddu, professor of urology and radiology at University of Texas Southwestern Medical Center, became the first in Texas to use Intuitive Surgical’s new da Vinci SP surgical system. He successfully used it to perform surgery on a ureter, which is the duct that passes urine from the kidney to the bladder.

Laparoscopic surgery historically requires multiple small incisions, which can cause more pain for the patient and increases the risk of hitting a blood vessel. However, the da Vinci SP system can perform the same procedure with a single, one-inch incision.

“Manual single-incision surgery was always technically challenging because of the ergonomics and the skillset necessary to work through a small hole was quite frustrating,” said Cadeddu. “But now it has been revitalized with this robot for single-port surgery.”

The da Vinci SP consists of three, multi-jointed robotic arms and a small 3D HD video camera. The surgeon sits in a cockpit and inserts all of the instruments through the single incision to reach the target anatomy.

The system scored FDA clearance in April 2014 and Intuitive Surgical began shipments in the third quarter of 2018. UT Southwestern is the first in Texas, but the 12th in the world to use it.

It’s currently only approved for urological procedures including kidney surgeries and prostatectomies. Cadeddu mentioned that ear, nose and throat physicians are already using it for throat surgery and that it will likely also be used for head and neck surgeries in the future.

Cadeddu has used da Vinci SP on 18 patients so far and reported that they appeared to experience less pain and heal quicker. But that cannot solely be credited to the da Vinci SP since he used it in conjunction with a magnet-controlled tool.

Levita Magnetics’ Levita Magnetic Surgical System, which received FDA approval in August 2016, grasps and retracts organs during laparoscopic surgery. Without a tool like this, surgeons have to make additional incisions to move either the bowel or bladder out of the way.

“You have to make a hole and put an instrument in to hold tissue or organs out of the way,” said Cadeddu. “But that hole hurts and there is a chance of hitting a blood vessel in the abdominal wall from which a patient can get a hematoma.”
1(current)
2