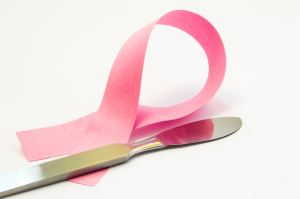 Nearly one in three women
consider cost to play a role in
their breast cancer surgical
decisions
Surgeons may be wise to discuss with women the costs of different types of surgical procedures for breast cancer in more detail.

That’s what a new study by the Duke Cancer Institute asserts, based on its finding that nearly a third of women report cost as a factor in their choice of surgery.

“Prior research, including our own, suggests that several barriers exist to cost communication within breast cancer surgeons, including lack of knowledge, perceived inability to help patients with the high costs of cancer treatment, and some concern that cost discussions may negatively impact the care that patients receive. Additionally, the actual costs of treatment are difficult to assess," lead author Dr. Rachel Greenup, a surgeon at Duke Cancer Institute, told HCB News. "Costs of cancer treatment, however, were influential on decisions for breast cancer surgery, even among insured and relatively advantaged women.”

Though similar in outcomes, surgical approaches can differ in cost. Surgeons often discuss emotional and physical-side effects but seldom the price of operations, which include breast conserving surgery (lumpectomy with radiation), mastectomy, and double mastectomy with or without breast reconstruction.

Researchers in the study provided an electronic survey to more than 600 women with stage 0-III breast cancer, asking them about their choice of surgery. Participants were substantially more affluent than the U.S. average, with 90 percent white, 70 percent enrolled in private insurance, 25 percent on Medicare, 78 percent college educated, and 56 percent with household incomes above $74,000 a year.

Such advantages, however, did not negate cost as a factor for many, with 43 percent reporting that they considered costs when making breast cancer treatment decisions. Nearly a third said it played a role in their choice of surgery, and women with household incomes under $45,000 a year said cost was more important than keeping their breasts or their appearance.

In addition, 35 percent of respondents, overall, reported their cancer treatment as a cause of financial burden, while 78 percent never discussed costs with their cancer team. Among even those with the highest incomes, 65 percent were fiscally unprepared for the cost of their procedure. Of all choices, double mastectomies were associated with higher patient-reported debt and financial hardship.

“Women should be open to inquiring about cancer treatment costs if they have concerns about affording their cancer care," said Greenup. "Institutionally and nationally there are resources that can help offload cancer-related financial burden for our patients. Evolving research suggests that the simple act of cost discussions may lead to cost-reducing strategies as well.”

The findings were published in the Journal of Oncology Practice.