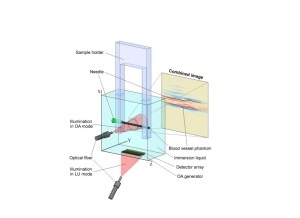 Russian scientists have developed
an ultrasound tomography system
that provides users with more
data than standard ultrasound
Scientists in Russia have designed a prototype of a universal system equipped to provide both standard ultrasound images and scans that show information difficult to obtain with conventional ultrasound.

Designed at The National University of Science and Technology (NUST) MISIS, the real-time, optical-acoustic and laser ultrasound tomography solution possesses greater sensitivity to detect tumors, and can produce two types of images, one of which is optical acoustic images to distinguish areas that absorb optical radiation in different ways.

“Light is absorbed directly in the object under study (a small portion of a blood vessel or tumor begins to 'vibrate'),” said Vasily Zarubin, one of the co-authors of the study and an engineer of the NUST MISIS Laboratory of laser ultrasound non-destructive control, in a statement. “The waves excited in this way are recorded by a multitude of receivers (a special acoustic antenna), and the signals from these elements are then used to build accurate images of the object, providing contrast for light absorption."

The second type, he adds, are laser ultrasound images, which use acoustic contrast to differentiate areas that reflect ultrasound waves in different ways. Light is absorbed in a special plate, which begins to "vibrate" and create waves that help in assessing subjects in a similar manner to standard ultrasound.

“In this case, ultrasonic waves are scattered by inhomogeneities of the object and are received by the same acoustic antenna,” said Zarubin. “The signals from it are used to construct the final laser ultrasound images."

The physical phenomenon behind the system is the optoacoustic effect, in which laser radiation of a very short wavelength is absorbed in an irradiated tissue, leading to the rapid heating of a part of it. The rising temperature causes the substance of the tissue to expand and excites the ultrasonic waves. This creates short laser pulses that cause "vibration" within the tissue area and the emission of ultrasound by it.

When combined, the two modes create an image that provides physicians with more information for diagnostics compared to standard ultrasound, and offer users a number of capabilities. These include the ability to visualize vessels during stenting, shunting and other procedures; and being able to accurately view the borders of tumors in ultrasound scan format without having to resort to surgery.

The team is currently working to adapt the prototype to specific tasks and searching for users to try it out.

The findings were published in the international scientific journal, Photoacoustics.