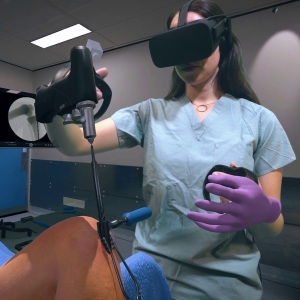 Virtual reality may train surgeons
better than traditional approaches,
says study
Surgeons trained on virtual reality platforms may be better equipped to perform operations in the real world versus those who receive conventional training.

That is the claim made in a new study by researchers at UCLA’s David Geffen School of Medicine, who saw improvement in overall surgical performance more than double for students using Osso VR, a virtual reality-based surgical training platform.

“Your brain experiences what it is seeing and interacting with as real, as opposed to watching a video or reading a book, where you are quite aware that you are either reading or watching,” Justin Barad, co-founder and CEO of Osso VR, told HCB News on the advantages of training with VR, calling it a “more natural way to learn. In addition, research has shown that practicing a technical task in the same context as that in which it will be performed leads to improved skill transfer and retention. VR has the ability to do this, as we can recreate an operating room, interventional suite or whatever environment is required for the task at hand.”

Named “Randomized, Controlled Trial of a Virtual Reality Tool to Teach Surgical Technique for Tibial Shaft Fracture Intramedullary Nailing,” the study was conducted to address the potential of VR for addressing the shortage of training paradigms and opportunities available to students, who are required to learn how to perform a growing number of procedures and use new medical devices, while balancing work hour restrictions and non-clinical administrative tasks. A 2017 study from the University of Michigan found that 30 percent of graduating residents were still unable to perform independently, even after 14 years of education.

The assessment consisted of 20 participants randomized between a traditionally trained group (SG) and a VR trained group to a specified level of proficiency. Each performed a tibial intramedullary nailing on a sawbones simulation, with a blinded observer grading them.

Those in the VR group were 20 percent faster on average than those in the SG one, and completed 38 percent more steps correctly in the procedure-specific checklist. Ratings in all categories of the Global Assessment 5-Point Rating Scale placed overall total improvement for the VR group at 230 percent.

Barad credits greater performance among students trained with VR to the sense of presence the technology provides, along with its hands-on, intuitive interactivity and ability to objectively and automatically assess procedural readiness.

“We have several ways to measure surgical proficiency, but it is really in the operating room with actual patients where we need to eventually demonstrate that this technology has a direct impact on team performance,” he said. “We can measure surgical time, blood loss, complications, and also evaluate surgical video to assess both individual and team performance. Ultimately, this whole platform is in service of the patient, and at the end of the day it is critical to show that the investments we are making are directly benefiting them.”

The findings were presented this week at the 2019 Current Annual Meeting of the Western Orthopedic Association.