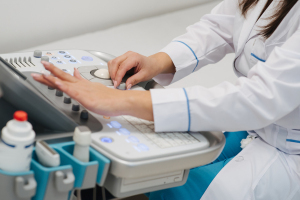 Dense breast tissue makes it tougher to find tumors on mammography and is found in almost 50 percent of American women ages 40s through 50s — and many states now have laws requiring providers to notify those with this type of tissue about additional testing with both MR and ultrasound.

But a new study appearing online in the Journal of the American College of Radiology suggests that these laws aren't leading to additional ultrasound screening.

“Dense breasts may mask small cancers on mammography,” Dr. Christoph Lee, senior author of the study and a researcher at the University of Washington and the Hutchinson Institute for Cancer Outcomes Research in Seattle, told Reuters, adding that, “ultrasound is not influenced by breast density and may detect additional cancers.”

Lee and his team looked at the notification laws and data from 12,787 wellness visits of women ages 40 to 74 from 2007 to 2015 to see their impact on the frequency of orders for ultrasound screenings by physicians.

They found that about 29 percent had breast exams, and about 22 percent had a screening mammogram ordered — but ultrasounds were ordered in only 3.3 percent.

The screening rates for ultrasound stayed low despite changes in notification laws during the study's time frame. Such laws are now in place in 36 states.

“Physicians may not recommend supplemental ultrasound for the majority of women with dense breasts, as the current evidence suggests that risks outweigh benefits of screening ultrasound,” suggested Lee.

The risk-benefit issue centers on the fact that while earlier tumor detection leads to easier treatment, it also can lead to overdiagnosis, and unnecessary further medical interventions.

The study did not have data on how many patients ultimately got ultrasound screening rather than physician-orders for the tests.

Earlier research did find that notification laws led to additional ultrasound screenings — when they mandated discussion of the benefits of more testing.

An additional issue could be that doctors might send patients for MR rather than ultrasound, Dr. Richard Bleicher, at Fox Chase Cancer Center in Philadelphia, told Reuters.

“Breast MRs are recommended and used frequently in women who have a genetic predisposition for breast cancer; these women are those who have a family history and get screened at a young age for a gene mutation, or develop cancer at a young age and then get gene tested,” he advised, adding, “since MRs are the predominant modality used (along with) mammography in these younger women, these are the same women who typically have the densest breasts, and screening ultrasound is unlikely to replace breast MR.”

Breast screening legislation was in the news earlier this week when New York State passed a law requiring large group insurers to cover medically necessary mammograms for women between the ages of 35 and 39.

"By signing this legislation, we are taking another step toward breaking down barriers to breast cancer screening and improving access to health care for all women in New York," Governor Cuomo said in a statement.

The law in question is named after Shannon Saturno of Babylon, Long Island, who passed away from breast cancer at 31 following a three year battle.

“Lowering the age of covered annual mammogram screenings will ensure women can take action before it's too late. Shannon's Law is long overdue, and I'm grateful to Governor Cuomo for his support,” said assembly member Kimberly Jean-Pierre in statement.