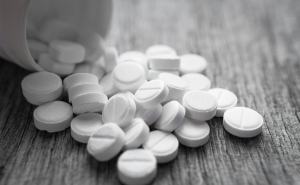 An Oklahoma ruling Monday could be an omen of costs to come for opioid maker Johnson & Johnson.

The $572 million guilty ruling — one of the biggest money awards ever in the U.S. — is the first in the country to put accountability on a drug company for the raging epidemic, which District Judge Thad Balkman called an “imminent danger and menace.”

“The state met its burden that the defendants Janssen and Johnson & Johnson’s misleading marketing and promotion of opioids created a nuisance as defined by [the law],” said the judge, according to CNBC, adding that health and safety of Oklahomans had been “compromised.”

“We showed how the company repeatedly ignored warnings by the federal governments and its own scientific advisers about the dangers of its drugs and the risks of marketing its products the way it did," stressed Oklahoma Attorney General Mike Hunter at a Monday press conference.

He added that, "we have proven that Johnson & Johnson has built its billion-dollar brand out of greed and on the backs of pain and suffering of innocent people," according to CBS News.

J&J and its subsidiary Janssen plan to appeal.

One issue is that the ruling said that the companies had trained sales staff to tell clinicians that the risk of addiction was low — just 2.6 percent or less — as long as the drugs were physician prescribed. It also targeted liberal script-writers as “key customers.”

The multimillion-dollar judgement covers just a single year of the state's efforts to battle the crisis, which a number of government witnesses stated would take at least two decades to accomplish. But the ruling noted that this time frame was not proved, stating that, “the state did not present sufficient evidence of the amount of time and costs necessary, beyond year one, to abate the opioid crisis.”

Investors had anticipated that the company would be hit with a fine of $500 million to $5 billion, CNBC noted, citing Evercore ISI analyst Elizabeth Anderson.

“Janssen did not cause the opioid crisis in Oklahoma, and neither the facts nor the law support this outcome,” J&J general counsel Michael Ullmann said in a statement. “We recognize the opioid crisis is a tremendously complex public health issue and we have deep sympathy for everyone affected. We are working with partners to find ways to help those in need.”
1(current)
2