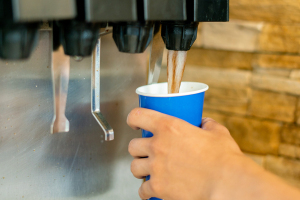 A new study says gadolinium from contrast
agents can be found in soda and
tap water
Remnants of contrast-based gadolinium used in MR exams are present in everyday tap water and soft drinks served to patrons in restaurants, say researchers at Jacobs University Bremen in Germany.

The team made the finding after identifying the rare earth element in rivers worldwide, and are claiming that its presence is actually useful, and not harmful.

“The presence of gadolinium contrast agents reveals the presence of waste water-derived substances in a sample; such compounds may be toxic at low concentrations, acting as endocrine disruptors,” Dr. Michael Bau, professor of geoscience at Jacobs University Bremen, told HCB News. “The Gd contrast agents themselves come at such low concentrations that they do not impose any health risk. So it is actually a very useful tracer for waste water-derived substances, and it would NOT be beneficial to remove them from the water.”

Following MR exams, patients excrete gadolinium in the hospital or at home from their kidneys, with the agent making its way through the sewage system to local waste water treatment plants. Waste water treatment processes, however, are unable to remove it, allowing gadolinium to be part of the produced clear water that enters rivers and lakes. These bodies of water empty into seas and build up ground water, making the gadolinium part of available sources of drinking water.

Initially examining tap water in Berlin, Essen, Cologne and London, the team expanded its study to include water in Bremen, Düsseldorf, Dresden, Karlsruhe, and Munich. Tap water in Berlin was found to be the most contaminated, with 99 percent of the gadolinium determined to be from contrast agents. The amount has also continued to increase over the past years, a trend expected to continue with the rising number of MR scans.

Rather than be concerned about drinks containing contrast-based Gd, Bau says people should instead turn their attention to the real danger: xenobiotics.

The findings were published in the journal, Science of the Total Environment.