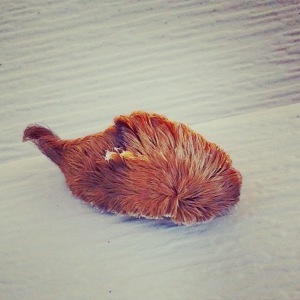 In an effort to rid itself of pesky birds that could create a mess and spread disease, one Texas hospital found itself at the wrong end of the law of unintended consequences when the nets it put up to drive off its winged pests created a safe space for the "asp", a stinging caterpillar that is the most venomous of its kind in North America.

The birds dining preference for the bugs, also known as puss moth caterpillars or Megalopyge opercularis, had kept the population under control.

Rice University researchers found, in a three-year study published in the journal Biology Letters, that the asp population grew 7,300 percent on trees with anti-bird nets versus those without netting.

“I've been stung by a lot of things and an asp sting definitely ranks high up there,” research team member Mattheau Comerford, an ecology and evolutionary biology graduate student at Rice, noted, according to Newsweek.

The bugs have spines that release poison that causes intense pain, and can lead to headaches, vomiting, and stomach distress, along with red spots on the skin that can last for up to five days.

"It takes about 10 minutes before the pain kicks in so you might not even realize you've been stung at first,” explained Comerford, adding, “it feels like a broken bone and the pain lasts for hours. I was stung on the wrist and the pain traveled up my arm, into my armpit, and my jaw started to feel pain."

The bug bites can make matters even worse near a healthcare facility, he stressed. "In this area, there is a high density of people with allergies and compromised or depleted immune systems, putting them at a higher risk for the ill effects of the asp stings."

The bird poop/dangerous bite trade-off highlights the importance of taking into account the ecosystem when making such environmental decisions, said Glen Hood, the Rice study leader and research assistant professor of biological sciences at Wayne State University. “It's highly suggestive that when you don't take into account the natural interactions taking place within a community or ecosystem, even in an urban setting, it can cause unforeseen consequences," he observed.

Birds can be a dangerous — and expensive — problem for institutions. In Glasgow, Scotland, for example, a fatality tied to pigeon droppings played a role in leading to over $450,000 in pest control efforts at the Queen Elizabeth University Hospital in Glasgow, including bird spikes and netting, plus anti-mold and fungus initiatives, the Daily Record newspaper reported in July.

In January, a 10-year-old boy died at the hospital and it was found that the fatality was linked to the fungal infection cryptococcus, found in pigeon droppings and soil. The organism is not a big threat to those who are healthy, but can be fatal to those who are immunocompromised.