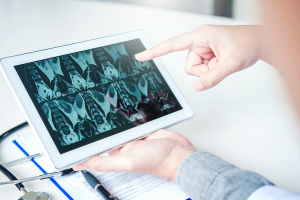 The CheXpert model can detect possible signs
of pneumonia in 10 seconds
Researchers at Intermountain Healthcare and Stanford University are touting a new AI system they developed, claiming it can detect signs indicative of pneumonia within 10 seconds.

If validated, the CheXpert model could significantly chop down the current 20 minutes to hours physicians spend reading and confirming these diagnoses, and allow vital treatment for severely ill patients to go into effect sooner.

Developed by Stanford Machine Learning Group, the CheXpert system is an automated chest X-ray interpretation model trained on 188,000 images taken from Stanford Medical Center to use artificial intelligence to determine the presence of pneumonia on X-ray scans.

During the study, the system was used to read the X-ray images of 461 Intermountain patients, with three radiologists categorizing each as “likely,” “likely-uncertain,” “unlikely-uncertain,” or “unlikely” to have pneumonia. They also identified images they believed showed pneumonia in multiple part of the body, as well as whether patients had parapneumonic effusion, which is when fluid builds up between the lungs and chest cavity. Categorization among the radiologists differed in more than half of patients.

The CheXpert model identified all key findings in X-rays that were comparable to those of the radiologists in 10 seconds. This includes natural language processing, the current system used by radiologists to create a radiology report, according to the researchers, who see the CheXpert model as a potential replacement. Many radiologists seek to replace NLP due to it being the most frequent cause of errors within ePNa. A 2013 study in JAMA Internal Medicine found that 59 percent of errors made by ePNA were due to NLP processing of radiologist reports. In addition, emergency department physicians find it challenging to sift through and define for themselves the unstructured language used by radiologists to interpret shadows on chest X-rays.

Researchers next plan to test the system live in emergency departments of select Intermountain hospitals, starting this fall.

"We plan a three-month prospective trial of ePNa with CheXpert in one of Intermountain's Salt Lake Valley hospital ED versus three usual care hospitals running ePNa, an electronic clinical decision support tool used commonly for pneumonia care, with the prior Natural Language Processing system," said Dean. "If successful, we hope to roll it out across other Intermountain Healthcare hospital emergency departments and perhaps later, other emergency departments using the Cerner electronic medical record."

The first clinical application of CheXpert will focus on pneumonia, and will be followed by applications for detecting other diseases seen on chest X-rays, such as heart failure and COPD.

Research was funded by the Intermountain Research and Medical Foundation.

The findings were presented this week at the European Respiratory Society’s International Congress 2019 in Madrid, Spain.