US researchers find new insights on the importance of traumatic microbleeds 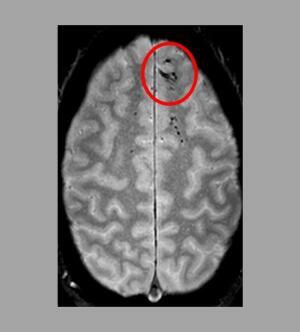 U.S. scientists have found that damage to blood vessels following head injury may help predict future health problems and disabilities, and could be a potential biomarker for determining which patients would benefit from treatments that target vascular injury.

"Traumatic microbleeds may represent injury to blood vessels that occur following even minor head injury," said Lawrence Latour, a researcher at the National Institute of Neurological Disorders and Stroke (NINDS), part of the National Institutes of Health, and senior author of the study, in a statement. "While we know that damage to brain cells can be devastating, the exact impact of this vascular injury following head trauma is uncertain and requires further study."

The study utilized MR rather than CT, due to microbleeds typically being too small to detect with the latter modality.

One part, performed by Cold Spring Harbor Laboratory, involved a postmortem scan of an injured brain. Utilizing a high-throughput neurohistological pipeline consisting of various techniques for labeling and visualizing brain slices, the lab team digitally analyzed the postmortem tissue at micron resolution and correlated the findings with those of MR scans for a clearer view of vascular injury incurred.

The researchers at CSHL found greater blood vessel damage than that of nerves, with an iron stain revealing a significant amount of blood cells across the area of the brain where surrounding lesions were located. A myelin stain used to show nerve fiber fragments did not show any significant damage.

This, according to the team, is a sign of traumatic microbleeds caused by ruptures along blood vessels across the brain, and with more research, could affect treatment development for TBI, which is mainly influenced by the long-standing hypothesis that that blunt force from TBI causes nerve damage.

"Nerve damage following traumatic brain injuries has been a majority point of view, and therapy as well as drug development has been targeted toward that," said Cold Spring Harbor Laboratory professor Partha Mitra in a statement. "The idea is that if the mechanism is actually different, therapeutic intervention may also be different."

Another part, headed by NINDS, examined 439 adults treated in the emergency department for head injuries, who received MR scans within 48 hours of their injury and again during four follow-up visits. They also completed behavioral and outcome questionnaires.
1(current)
2