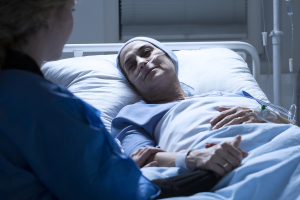 A new algorithm can identify "high-risk" cancer
patients who require end-of-life discussions
End-of-life conversations are essential but difficult. They convey a patient’s last wishes regarding treatment and care but can often be emotional for patients and physicians. As such, patients are less likely to initiate these discussions unless prompted until it’s too late, while clinicians may be hesitant or too busy to take the time to initiate them.

Researchers at University of Pennsylvania Health System are seeking to remedy this with the development of a new algorithm that flags oncology patients who would benefit from these conversations, so that physicians can ask them about their wishes sooner.

"In the absence of knowing a patient's hopes and goals for their medical care, the medical system is obligated to prolong life with all measures necessary," Dr. Nathan Goldstein, site-chair of the department of geriatrics and palliative care at Mount Sinai Downtown, who was unaffiliated with the study, told HCB News. "While some patients would certainly want this, not all patients would. Quality care is defined as matching the treatments received to what the patient would want, so not knowing what a patient wants can lead to providing them treatments that won't help them achieve their healthcare goals — a marker of poor quality care."

Having patients express what is important to them and what they see as a quality life worth living is significant to the quality of care they receive, as not knowing their healthcare goals and values can lead to treatments they do not want that take a toll on them, and add to the costs they and the healthcare system pay.

Of those flagged by the algorithm as “high priority” for such conversations, 51 percent died within six months of their assessment, compared to less than four percent deemed a “lower priority”.

Researchers developed the tool by applying three predictive models to 26,525 patients receiving outpatient oncology care at two hospitals within the University of Pennsylvania Health System. Each used information from EHRs such as gender, age, standard comorbidity data, and lab and electrocardiogram data.

Aside from the 51 percent that died within six months, the random forest model identified almost 65 percent of high-risk patients who died approximately a year-and-a-half later, compared to 7.6 percent of low-risk ones. Fifteen oncologists agreed that 60 percent identified by the algorithm as high-risk needed to have immediate conversations about their wishes.

The development of the algorithm, however, may not only facilitate these discussions but bring awareness to the challenges that prevent them from being had in the first place. For instance, while a physician may be aware that a conversation about a patient’s last wishes is required, he or she may not be educated in how to best gauge the topic.
1(current)
2