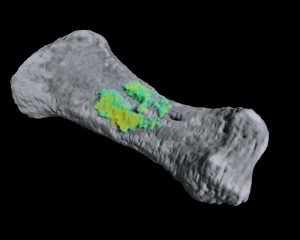 A combination of spectral CT imaging and a target-specific nanoparticle, the technique is characterized by the production of colors as identifiers of the minuscule breaks, the detection of which is impossible with standard X-ray imaging.

"Microfractures are tiny 'cracks' in a bone caused by strenuous activities or minor accidents. If the force applied by this manner exceeds the strength of that bone it may result in weakening of the bone, eventually resulting in a complete bone breakage or macro fracture," corresponding study author Dr. Dipanjan Pan, a professor in chemical, biochemical and environmental engineering at UMBC, and professor in pediatrics and diagnostic radiology and nuclear medicine at the University of Maryland School of Medicine, told HCB News. "If not detected early, this can lead to permanent damage, requiring surgery or other long term, expensive intervention."

The source of these marks are "GPS particles", nanoparticles developed by Pan and his team that are programmed to navigate and attach specifically to areas where microcracks are present. The elemental component of the nanoparticle is hafnium, the composition of which is detectable to X-rays. The element generates a signal to create visibility of the cracks. It has been proven by researchers to be stable enough for use in living creatures, with the substance safely excreted from the body.

Research for the technology was conducted at the University of Illinois Urbana-Champaign, and is based on an X-ray technique developed at MARS, a New Zealand-based enterprise which conducts CT scans with hafnium particles. The particles appear in color on the images to show the location of microcracks. It is this line of research and the use of CERN technology that enabled the company to produce the first 3D color X-ray system, an advanced CT scanner that is capable of generating images with over 8,000 times more information than standard human-scale CTs.

The research also suggests that that the technique could be used to identify more serious issues, such as blockage in the heart and other organs. Pan and his team expect it to be useful in general medicine, orthopedics and sports medicine clinics, and expect the technology needed for clinical trials to be available by as soon as 2020. He expects commercialization to commence through one of the startups in his laboratories, VitruVian Biotech.

"Photon counting CT/spectral CT is rapidly evolving as a next-generation X-ray imaging technique, although currently under research and development, both within academia and by major imaging modality industries. Hafnium-based other agents are being clinically evaluated as radiation therapeutics in humans," said Pan. "Availability of human scanners are anticipated in the very near future."

The findings were published in the journal, Advanced Functional Materials.

As COVID-19 tests remain scarce, some physicians turn to CT for diagnosis