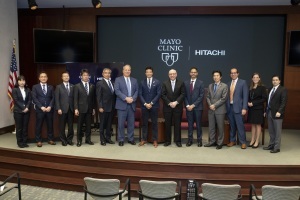 The facility will be constructed within the soon-to-be-built integrated oncology center, which will include proton therapy, at Mayo Clinic’s campus in Jacksonville, Florida.

"Through the collaboration with Mayo, it is about the development of a new cancer treatment option that includes extensive scientific research and working toward obtaining FDA approval," Sash Matsumoto, general manager at Hitachi America, told HCB News. "It means offering another option for patients who have serious or complex health issues."

An advanced form of radiotherapy, carbon ion therapy targets cancer cells while minimizing damage to surrounding tissue. The treatment utilizes a carbon ion beam to destroy malignant cells and attack cancers resistant to X-rays. Beams are accelerated up to 70 percent of the speed of light and treatment time is shorter than other forms of radiotherapy.

Discovered in the U.S. in the 1970s, carbon was previously used for cancer treatment more from a research standpoint and in an outdated form before being discontinued in the early 90s. It is only accessible at a number of centers in Asia and Europe, where radiation oncologists and physicists have studied the treatment for nearly a decade.

The establishment of a facility will enable researchers to assess the sufficiency of carbon ion therapy in treating various forms of cancer. This includes new and expanded therapies, as well as multi-modality treatment options.

Mayo and Hitachi will also work together on, and submit scientific evaluations and analyses of carbon ion treatment technology to the FDA to speed up approval of the therapy and identify which cancers would benefit the most from treatment.

"The scientific and published data done by colleagues in Europe and Asia gave Mayo and Hitachi reasons to believe this is a technology that should be explored more thoroughly in the United States," said Matsumoto. "Yes, we do expect to see more facilities in the U.S. and worldwide."

The oncology center is scheduled to open in late 2023. Proton beam therapy is expected to begin there in 2025, with carbon ion therapy anticipated to begin shortly afterward. Other forms of therapy that will be offered there include chemotherapy, immunotherapy, CAR-T cell therapy (chimeric antigen receptor T cell therapy), surgery, gamma knife radiosurgery and traditional radiotherapy.