Burnout is real: Addressing quality of life in radiology 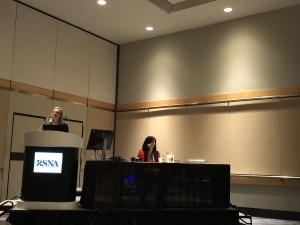 Dr. Stacy Smith, a radiologist at Brigham and Women's Hospital in Massachusetts, addressed the burnout of radiology residents in particular. She suggested creating wellness days for trainees so they can go to the doctor and dentist without taking days off and holding activities such as team building exercises, including a trip to an escape room, and a resident retreat.

Smith said the residents in her practice felt that these activities improved camaraderie.


“They felt less isolated, and they learned that others felt similarly, and this was very important for them, as well as bonding with the program administration; feeling they are not a cog in the wheel, they are part of this wheel.”

Smith also noted that her practice has a staffer to handle administrative tasks so that the residents aren’t burdened with “scut work.”

She also noted that physicians should model work-life balance.

Dr. Claire Bender, a radiologist at the Mayo Clinic, said leadership has to have open dialog on burnout, and the right leaders need to be selected to address the issue.

Healthy eating and sleep habits are also an important element of quality of life.

Bender also noted it was a good idea to measure physician well-being as part of institutional performance metrics.

“If you don’t have a healthy workforce, you’re probably not going to have the highest quality care and the safest care delivered to your patients,” Bender said.