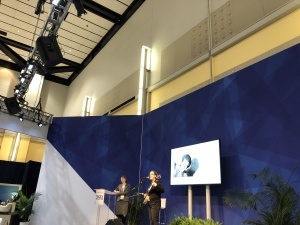 Rebecca Marsh at RSNA
Rebecca Marsh took the stage of the Discovery Theater at McCormick Place, banjo in hand. But she wasn’t merely entertaining the crowd of radiologists with a musical interlude, she was encouraging them to end the practice of patient shielding in radiology.

Marsh, an imaging physicist affiliated with the University of Colorado Hospital performed a rendition of Woody Guthrie’s “So Long, It's Been Good To Know Yuh.”

In April 2019, Marsh’s study, “Patient Shielding in Diagnostic Imaging: Discontinuing a Legacy Practice,” co-authored with Michael Silosky, also of University of Colorado, was published in the American Journal of Roentgenology.

The study noted that radiation exposure has been significantly lowered over the years and that patient shielding, while considered a common practice, actually introduces significant risks. For example, automatic exposure control technology can lead to an increase in X-ray tube output if a lead shield enters the imaging field of view and shields positioned incorrectly can lead to repeated exams.

Marsh said the effort to end shielding will involve having conversations among staff and communicating new policies with patients.

“It’s not to say this is exactly what you should be doing in clinical practice,” Marsh said. “It’s to say if you’re going to revisit this at your facility … It involves conversations with everybody from nursing staff, NICU staff, radiologists and rad techs. We’re trying to provide a little bit of guidance in terms of how to have those conversations.”

Marsh also noted it’s important to be consistent with any new policies, especially if some shielding is still allowed because it makes the patient feel better.

“If you have a patient who comes in for a hand X-ray and you do shield them and then they come in two weeks later for a chest X-ray and you don’t, then we’re sort of sending mixed messages,” Marsh said. “I think that that’s a conversation that facilities should have within their own facilities and decide on a practice that they think is best suited for their patient population, and something that their staff feel comfortable with.”