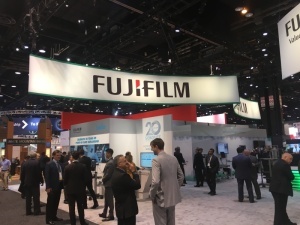 An arm of the Japanese medical imaging producer is alleged to be working with an adviser to determine the best approach for securing a winning bid, people familiar with the matter told Bloomberg News. The sources asked to remain anonymous due to the information being private.

A French-based enterprise, Curium Pharma manufactures radiopharmaceuticals for nuclear medical exams to help diagnose cancer, as well as heart, brain and bone diseases. It was formed in 2017 through the merger of IBA Molecular and Mallinckrodt Nuclear Medicine, and is owned by CapVest Ltd.

Private equity firms CVC Capital Partners and Bain Capital are among those who made initial offers for the Curium Pharma earlier this month, as did Clayton Dubilier & Rice, Nordic Capital and PAI Partners in first-round bids.

Fujifilm is a provider of X-ray, mammography, endoscopy, CT and in vitro diagnostics equipment. Its interest in the deal, according to the sources, aligns with its objective to make its healthcare and material solutions division more independent from its original business of cameras and photographic paper. The segment accounted for 43 percent of its revenue in the year through March 2019, up from 38 percent five years earlier, according to Bloomberg News.

The company has spent $3.5 billion in acquisition deals over the last two years, with its most recent being the acquisition of Hitachi’s diagnostics imaging unit in December for over $1.6 billion (¥179 billion).

Curium Pharma expects to receive a next round of bids in February, reported Bloomberg News, though no final decisions have been made, and there is no certainty that the deliberations will result in a transaction.

Representatives for Fujifilm and CapVest declined to discuss the matter with Bloomberg News.