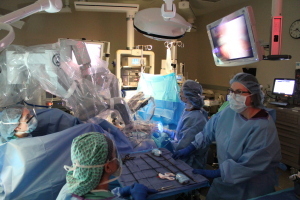 DaVinci Surgery
HCB News: On the pharmaceutical side, there seems to be some bipartisan support for importing prescriptions from Canada, for example, to reduce costs. Is that something you’re watching with interest?
WH: We are, absolutely. How much of what we’re restricted with is due to lack of market dynamics? Is there appropriate competition to keep prices down? The other piece I would challenge someone to show me in having lived abroad for my last six years in the Army, both in German and Italy, where there’s a socialized healthcare system, what they would pay is not nearly what we would pay for those drugs. So somewhere there’s an inequity on who is really bearing the cost for research and development. It makes you wonder if it’s a level playing field. I don’t think it is, but how can you challenge it when those are multibillion-dollar industries? 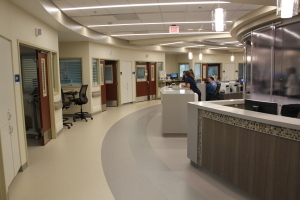 ICU Circle
HCBN: You mentioned challenges regarding attracting talent. Are you experiencing shortages of any particular type of healthcare professional for your organization?
WH: We are. Hutchinson is in Reno County. Geographically, if I’m not mistaken, we’re the second largest county in the state of Kansas. But we’re also the second oldest. That makes it challenging when you start dealing with the demographic of elderly patients and all their conditions and comorbidities when they present for care. We’re in a community that we try to recruit physicians in, but there’s the lure of living 55 miles away in Wichita and driving here. We want it to be enticing for them to live in the community where they can become good community members and stewards of our resources. Because every one of them is a highly-paid professional, which means if they’re not living here, you’re paying them, but that money is going somewhere else. Even more than that, if you can recruit to your area, can you recruit the right specialties? We struggle with making sure we have enough primary care physicians. We need neurologists, gastroenterologists, OB-GYN, and there’s a whole host of other specialties. We need to get them here, show they’re valued, and make sure we prevent burnout.
1
2
3(current)
4
5