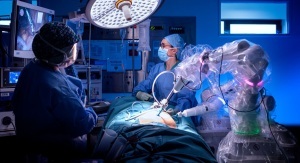 The Western General Hospital, part of the NHS Lothian Health Board, is the first to perform minimal access surgical procedures on patients in Great Britain. The second is the Milton Keynes University Hospital NHS Trust in Buckinghamshire, which is the first hospital in England to adopt the system.

“We are delighted to be creating history and to be at the very forefront of medical science. Our team at the Western General Hospital are the first in Europe and among only a handful in the world to pioneer this new type of robotic surgery,” Dr. Tracey Gillies, medical director of NHS Lothian, said in a statement. “This is a really exciting development and is a credit to the team, who are determined to push boundaries to provide the best patient care possible.”

The system is designed for minimal access procedures (MAS) — also known as keyhole or laparoscopic surgery — and has initially been used in a number of colorectal surgeries such as treatment for serious bowel disease or bowel cancer. It is composed of three independent arms modeled in the same size and shape as those of humans. Each are coupled with 3D visualization and unique instrument controls that enable surgeons to mimic their own human movement for precise and less strenuous surgeries. A clinical registry is also available to provide a database of patient outcome information to ensure safety and technical data to support assisted learning and help optimize the use of Versius in the future.

The portability of the solution enables it to be moved from one site to another within and between hospitals within an NHS trust. Many expect this feature to improve patient outcomes and open up more bed space faster. It also can be used frequently, holding the potential to perform up to 700 MAS procedures annually across both The Western General Hospital and Milton Keynes University Hospital NHS Trust. The ability is seen as cost-effective, as such operations would otherwise require open surgery.

Further saving on costs is the fact that MAS procedures reduce rates of surgical infections, of which there are currently 800,000 recorded cases that have cost health systems millions. Only one-third of procedures that can be performed laparoscopically are done so in such a manner in the U.K. In addition, MAS operations are linked to fewer post-operative bed days required for recovery, with a 2018 report by the Office of Health Economics indicating that a shift to MAS reduces the average length of stays for gynecology patients from 5.5 days to just 1.5 days in 95% of cases.

“Versius represents a remarkable step forward in this field, and one that could help make keyhole surgery far more accessible,” said Professor Joe Harrison, chief executive at Milton Keynes University Hospital NHS Foundation Trust, in a statement. “The hope for us is that this will lead to better outcomes for patients as well as helping us to free up bed space that can then be used to help others in need.”

The system can be purchased through a Managed Service Agreement, which provides budget certainty through a fixed cost. This provides it with the potential to be used by NHS hospitals that in the past may have found upfront costs of surgical robotics to be prohibitive.

More NHS hospitals are scheduled to introduce the system to their own practices in 2020.