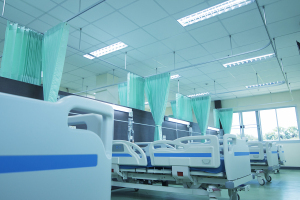 Hospitals are facing a shortage in beds for COVID-19 patients as the number infected continues to grow, says a USA TODAY analysis
Hospitals in every state in the U.S. could find themselves in short supply of beds needed to care for severely ill patients with the coronavirus.

A major spike, according to analysis, would create a ratio of close to six severely ill patients for every existing hospital bed — and that’s on the assumption that all 790,000 beds in the U.S. are empty. Since roughly two-thirds of beds are occupied, according to experts who participated in the assessment, the ratio rises to about 17 patients per bed.

“Unless we are able to implement dramatic isolation measures like some places in China, we’ll be presented with overwhelming numbers of coronavirus patients — two to 10 times as many as we see at peak influenza times,” Dr. James Lawler, who researches emerging diseases at the University of Nebraska Medical Center and the Global Center for Health Security, told USA Today.

An estimated 23.8 million Americans could contract the virus, according to the analysis. Experts expect there to be more, with the Johns Hopkins Center for Health Security estimating that 38 million Americans will require care, including up to 9.6 million who will need to be hospitalized. Of this latter figure, a third will need ICU-level care.

The surge in COVID-19 cases worldwide has caused providers to look into canceling emergency procedures such as elective surgeries and tighten the distribution of resources as supply chains continue to become depleted under soaring demands for products such as face masks and respirators.

Further adding to the difficulty in managing new patients is the fact that most hospitals are not designed to handle an outbreak like this, especially during winter flu season. Gaps between capacity and potential demand vary by state, with Oregon, Washington, New Mexico and California in need of eight times as many beds, according to the analysis, compared to South Dakota and North Dakota, which would hold a gap of three patients for every bed. Taking into account beds already in use in each state, these figures rise 20 and 10 times more, respectively.

States with high elderly populations are even more limited, with the analysis finding only eight that would have enough beds to treat the one million Americans, age 60 and over. Most of these eight are in the Midwest, and all are made up of rural populations that rely on small hospitals which are not typically equipped to handle multiple patients in need of intensive care.
1(current)
2