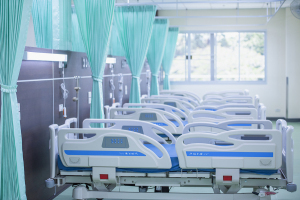 West Virginia is considered the most prepared state in hospital capacity to deal with the coronavirus, while Utah is the least prepared, according to a report by QuoteWizard.
More than 205,000 people across the U.S. have contracted COVID-19, raising concerns about hospital capacity for those with serious cases. A new report reflects this worry, comparing states to one another in preparedness based on their bed and physician numbers.

An average of 2.96 physicians and 2.4 beds are available per 1,000 patients nationwide, according to the assessment, which was conducted by QuoteWizard, an insurance marketplace owned by LendingTree. While states like West Virginia, New York and Pennsylvania were found to have higher numbers of physicians and beds, others like Utah, Idaho and Nevada ranked lower in hospital capacity.

“From the data we analyzed and the resulting state rankings, [there appears] to be a regional correlation,” Adam Johnson, research analyst at QuoteWizard, told HCB News. “The states lower on physician and hospital bed preparedness all tend to be in the western U.S. [There is] lower population density in western states, compared to more densely populated states in the Midwest and East Coast. Population density appears to be a common correlation in a state's ability to provide a per capita health capacity.”

The availability of resources such as beds, nurses, physicians and equipment like ventilators plays a large role in the ability of a healthcare system to manage the COVID-19 pandemic. The more there are, the greater the hospital’s capacity for flattening the curve, which is the total number of cases in a period of time since the onset of the first case. Too many cases in a short period of time can overwhelm the ability of a health system to treat people.

Using Kaiser Family Foundation data, QuoteWizard ranked states in preparedness based on the number of hospital beds and physicians available per 1,000 patients. West Virginia came out on top with 3.17 physicians and 3.74 beds. While New York holds an average of 4.6 physicians, it only offers 2.7 beds, putting it behind West Virginia and ahead of Pennsylvania, which has 3.99 physicians and 2.92 beds.

Adding to the vulnerability that hospitals face from the coronavirus is the fact that 23 states experienced a decrease in hospital beds between 2014 and 2018. A possible motive according to Johnson could be cuts in healthcare funding for both public health funds and privately operated hospitals. “When funding cuts are made, healthcare resources like staff and equipment go with it.”

He also points out that just because a state ranks higher than others in preparedness, it does not mean that state is fully prepared for the impact of the virus.

“Even the most prepared states like New York can experience an overwhelmed healthcare system when there is a steep curve of new cases,” he said. “New York is receiving help from the federal government, but a big takeaway for other states is that it's less about increasing healthcare resources and focusing on reducing the curve. Reducing the number of new cases will ensure healthcare capacity is able to serve all those that are sick.”