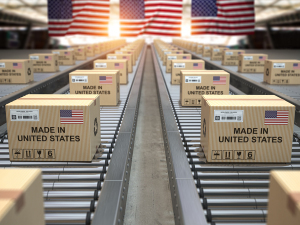 On Friday, President Trump told the press at the Coronavirus Task Force daily briefing that he had ordered U.S. firms to end the export of needed medical supplies.

“I‘m signing a directive invoking the Defense Production Act (DPA) to prohibit export of scarce health and medical supplies by unscrupulous actors and profiteers,” Trump said, according to the New York Post.

“The secretary of Homeland Security will work with FEMA to prevent the export of N95 respirators, surgical masks, gloves, and other personal protective equipment. We need these items immediately for domestic use. We have to have them,” he stated.

A day earlier the administration had stopped mask maker 3M from shipping masks to Canada and Mexico.

The Minnesota-based company pushed back over the Trump criticism, with CEO Mike Roman telling CNBC that, “the narrative that we aren’t doing everything we can as a company is just not true.”

Roman added, the company is boosting mask-making as fast as it can, to roughly 35 million N95's a month, with a projection to double that amount by the end of 2020.

In a statement issued on its blog of April 3, 3M explained its position, noting there are “significant humanitarian implications of ceasing respirator supplies to healthcare workers in Canada and Latin America, where we are a critical supplier of respirators. In addition, ceasing all export of respirators produced in the United States would likely cause other countries to retaliate and do the same, as some have already done. If that were to occur, the net number of respirators being made available to the United States would actually decrease. That is the opposite of what we and the administration, on behalf of the American people, both seek.”

Regrettably, no amount of administration DPA pressure now can take the place of the government's surprise at the pandemic and its missed opportunities for prior preparedness.

“It’s a production capacity problem,” Dave Kaufman, a former senior official at the Federal Emergency Management Agency — now with think tank CNA — told Wired, adding that “the DPA is designed to stimulate that, but it’s not an overnight solution.”

The surprise by which the pandemic caught U.S. leadership is itself a bit surprising, considering that a 2015 National Center for Immunization and Respiratory Diseases study, published in the journal Clinical Infectious Diseases, clearly laid out both the scope of a pandemic threat and the demands of materiel that would be needed to meet the challenge.

The report noted that in a flu pandemic of the size of the present COVID-19 one, “assuming that 20% to 30% of the population would become ill, 1.7 to 3.5 billion respirators [N95 masks] would be needed in the base case scenario, 2.6 to 4.3 billion in the intermediate demand scenario, and up to 7.3 billion in the maximum demand scenario (for all scenarios, between 0.1 and 0.4 billion surgical masks would be required for patients).

Mask makers typically turn out 1.5 billion N95 masks a year in the U.S., according to Wired.