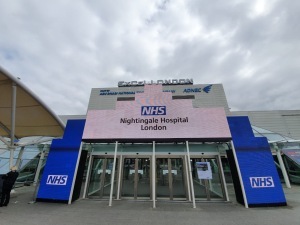 London's new Nightingale Hospital — a “pop-up” COVID-19 hospital assembled in nine days at the ExCel Exhibition Centre — has received its first patients, according to Reuters.

The hospital, opened by Prince Charles on Friday, will house up to 4,000 beds with ventilators and oxygen in 80 wards, and will be staffed by as many as 25,000 doctors, nurses and other personnel.

The ExCel Centre was being rented to the National Health Service (NHS) by owner Abu Dhabi National Exhibitions Company (ADNEC) for £2 million to £3 million, according to The Sunday Times. The money was to cover fixed costs.

But that initial deal has changed, according to ExCel chief executive Jeremy Rees. "We have since decided to cover the fixed costs ourselves," and provide the space rent-free, according the the BBC.

"To be clear, profit has always been the furthest thing from our minds," said Humaid Matar Al Dhaheri, managing director and group chief executive of ADNEC, adding, "it is our firm commitment that we will not charge a penny for the use of our facilities, and we will provide the NHS with the operational and logistical support it needs for NHS Nightingale London."

After a sluggish response including suggestions that “herd immunity” was a viable strategy, and with U.K. prime minister Boris Johnson now in the ICU battling against infection with coronavirus, the nation is responding with more aggressive countermeasures.

In other news of London-based responses to the pandemic, the city's famed Black Cabs — which have a privacy divider between drivers and passengers — will now transport those with symptoms of COVID-19 to their doctors for other non-emergency ailments, thanks to a partnership with the NHS and taxi platform Gett, according to Mashable.
1(current)
2