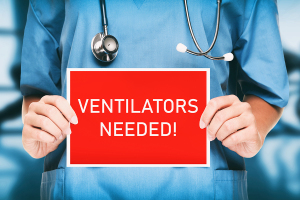 Seven Northeast states have teamed up in a consortium to produce a supply chain of PPE, ventilators and other essential COVID-19 supplies.
New York is teaming up with neighboring states to form a consortium that seeks to establish a regional supply chain for masks, gowns, ventilators, testing supplies and other essential equipment for combatting COVID-19.

Governor Andrew Cuomo announced the news Sunday, saying that New York and the other states — including Connecticut, Massachusetts, Rhode Island, New Jersey, Delaware and Pennsylvania — were motivated to come together after dealing with a “totally inefficient and ineffective” purchasing process that pitted all 50 states against one another, the federal government and other entities, according to the Hudson Valley Post.

"The COVID-19 pandemic created a mad scramble for medical equipment across the entire nation — there was competition among states, private entities and the federal government and we were driving up the prices of these critical resources," Cuomo said. "As a state and as a nation we can't go through that again. We're going to form a regional state purchasing consortium with our seven northeast partner states to increase our market power when we're buying supplies and help us actually get the equipment at a better price.”

Shortages in personal protective equipment and medical devices such as ventilators throughout the pandemic has introduced instances of price gouging, with states vying with one another for supplies at exorbitant prices. New York went as far as to pay $248,841 for a portable X-ray machine that typically costs between $30,000 and $80,000, and estimated the total cost for supplies would cost $15 billion in spending and lost revenue.

Rather than relying on manufacturers in China and other distant places that are facing overwhelming demand for supplies, the governors for each state seek to locate suppliers within the region.

Their combined efforts are expected to boost purchasing power and improve their clout with global suppliers, with New York bringing an annual budget of about $2 billion spent on medical equipment annually and the other states together, about $5 billion, reported ABC 33/40 News.

The Trump administration is also “turbocharging” efforts to shift U.S. dependency on China-based supply chains, an extension of its aim to bring manufacturing jobs back to the U.S.

“We’ve been working on [reducing the reliance of our supply chains in China] over the last few years but we are now turbocharging that initiative,” Keith Krach, undersecretary for economic growth, energy and the environment at the State Department, told Reuters. “I think it is essential to understand where the critical areas are and where critical bottlenecks exist.”