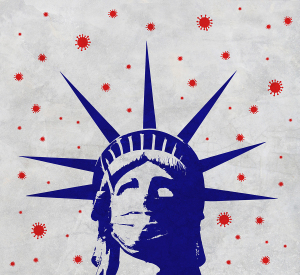 The shortage of medical supplies has forced the empire state into a bidding war with other states for ventilators and personal protection equipment at excessive prices — a practice known as price gouging. It recently paid $248,841 for a portable X-ray machine that typically costs between $30,000 and $80,000, and estimates that the total cost for supplies will cost $15 billion in spending and lost revenue.

“It’s like being on eBay with 50 other states bidding on a ventilator,” Cuomo told reporters in a press conference on Tuesday, reported on by ProPublica. “And then, FEMA gets involved and FEMA starts bidding! And now FEMA is bidding on top of the 50! So FEMA is driving up the price. What sense does this make?”

Price gouging is normally not considered a crime in most states unless a declared state of emergency is in effect. While many states have made it illegal throughout the pandemic, most laws around the practice only apply to the sale of consumer goods and services, not those made by states or by private or nonprofit businesses.

As the epicenter for the virus, New York has allowed anyone with needed supplies to sell to the state instead of just its approved vendors. This enables sellers to charge any price, with the state now paying $7.50 each for masks, about 15 times the usual price.

Other areas face the same dilemma, with Houston recently losing a bid of $4 per N95 masks — which usually cost 50 cents each. It has since placed a bid with a different private company for $2 million with the cost per mask at $5.56, according to Click2Houston.com.

At the same time, large national distributors are hesitant to sell more equipment to states with the most coronavirus cases, for fear of being accused of favoritism or collusion. Many are selling to customers on the same "allocation" or based on each one’s purchase history, to prevent stockpiling.

Vendors who have run through their inventories are also passing on higher prices from their suppliers, with some indicating that they would need to increase their own prices to cover rising import costs. “In some cases the cost is 15 to 20 times higher,” CEO Joe Kastner of New Jersey-based Shield Line LLC, a New York state vendor, told ProPublica.
1(current)
2