Resuming elective services a concern among 60% of frontline healthcare workers 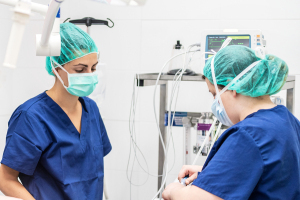 That’s the response rate Bain & Company received in its third Covid-19 Front Line Pulse Check, a special edition of the company’s sixth annual Front Line of Healthcare report, with the most common barriers listed as lack of patient and provider testing and insufficient PPE.

"The perspectives we are hearing from frontline providers indicate a high degree of apprehension about the coming months," said Joshua Weisbrod, a partner with Bain & Company and head of the firm's Americas Healthcare practice, in a statement. "As healthcare organizations seek to resume elective procedures, it will be critical to monitor preparedness, listen to physicians' needs, and deploy a wide range of resources wisely to continue to support clinicians in a new normal.”

More than 360 physicians and nurses nationwide were surveyed, once in March and twice in April, on the needs and perspectives of healthcare workers throughout the pandemic.

In addition to feeling unprepared, 40% of providers expected to see cuts in compensation from May to July, up from 30% who expected the same in April. Frontline clinicians, including primary care providers, assert that reductions in shifts or hours are the primary reasons for pay cuts, and 40% of specialists point to cancelled elective procedures as the main cause.

Providers also showed concern for their mental health, particularly those in New York City, which has become the epicenter of the virus in the U.S. Over 15% in the big apple rank burnout or mental health sustainability as a top concern and have expressed the need for virtual behavioral health sessions and support groups to keep their emotional well-being in check and manage their demanding work environments, as well as expected pay cuts.

Concerns, however, are beginning to drop as COVID-19 caseload curves flatten. The number of frontline providers “very concerned” for their own health and safety declined from 76% in the last week of March to 47% in the last week of April across the U.S. Concern levels dipped by more than half over the last month in Los Angeles and San Francisco, both of which have successfully flattened the curve, according to the survey. The exception is New York, where the most concern remains.

"After our third bi-weekly survey of frontline clinicians, it is promising to see some improvement in sentiment toward their own physical health and safety," said Michael Brookshire, a partner with Bain & Company's healthcare practice and co-author of the report, in a statement. "However provider concern is spiking around topics like burnout, mental health and financial stability. It will be important to address these issues next and provide frontline workers with effective options, such as virtual counseling visits, clinician support groups and flexible working conditions."