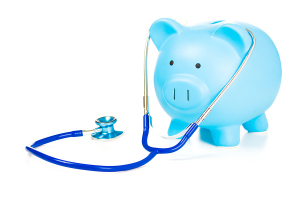 The drop in spending, attributed to cancellations in elective procedures and low patient volumes brought on by the COVID-19 pandemic, adds up to a 24.3% decline compared to April 2019. Hospital care spending dropped from $1.25 trillion to $746 billion during that time, according to the analysis by Altarum.

“While March 2020 exhibited the only previous occurrence in our historical time series (which goes back to 1989) of a monthly decline from the previous year, the April reading dwarfs the March value,” the company wrote in its report. “Spending reductions for most of the major components are even larger. The two largest categories, hospital spending and physician and clinical services spending, fell by 40.7% and 40.9%, respectively, while dental services declined by 60.8%, year over year.”

Exceptions were nursing home care and prescription drugs, which rose 6.3% and 5.1% year-over-year, respectively.

The health-spending share of GDP fell to 15.7% in April, compared to 17.1% in March, and a mainly steady trend near 18% over the past four years. This indicates healthcare spending is falling faster than the overall economy.

The analysis highlights a number of points about the state of healthcare spending compared to previous years that include:

Altarum expects spending declines to begin reversing modestly as the U.S. economy begins to reopen. A recent AMGA survey, however, found low expectations of revenue returning to its pre-COVID levels anytime soon. Close to 90% of medical groups and integrated health systems report losing a quarter or more in revenue as a result of the ongoing COVID-19 pandemic. Forty-one percent of healthcare systems and 36% of medical groups predict it will be at least a year before revenues return to pre-COVID levels, with many not expecting to see such results until at least the second quarter of 2021. Nearly 23% and 28%, respectively, say it is not yet known when revenues will return to normal.

A recent survey by Vizient found that more than half of patients feel at least somewhat safe returning to hospitals for elective procedures and are expected to do so in waves. The first will be those looking to move forward no matter the risk, such as oncology patients and those in pain, while the second will feel safe when there is a perceived low personal risk or a need for a low-risk procedure with little follow-up, according to Healthcare Finance.

Patients and family, however, expect greater transparency in what has changed since they were told to stay at home. They want hospitals to have detailed checklists and instructions to help them and their family caregivers understand what will happen when they come to a hospital. They also want safety and infection prevention processes to be in place, such as PPE usage and cleaning of handrails, elevator doors and other high-touch areas.

“When it comes to restarting elective procedures, health care organizations need more than speculation about how patients might behave — they need to be able to accurately forecast demand to ensure they have the proper capacity, supplies and staffing in place,” said Kellie Goodson, MS, CPXP, director, performance improvement for Vizient during a webinar in late May. “The guidance provided by professional associates and industry experts is necessary, but leaves out a key piece of the puzzle: patient behavior.”