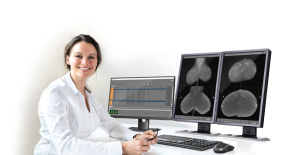 The company partners with a number of OEMs to route large mammography and tomosynthesis images, so that radiologists can read them quickly, and the latest release has increased the efficiency of image movement.

"We partner with GE, Hologic and Siemens to help move the large mammo and tomo data sets from acquisition on the gantry to the reading workstation," said Robert Van Uitert, vice president of marketing at Candelis. "When a radiologist needs to review five to ten years of prior patient images, this requires movement of a lot of data per patient."

The system uses what Van Uitert calls a "thin client viewer", rather than a traditional "thick client workstation" which requires sending a new data set to each radiologist workstation, resulting in an increase of data movement and reduced speed.

ImageGrid PACS provides pre-caching of images for quick image review and enhanced mammography prefetch for review of prior patient images.

"Our retrieval of the prior studies (is) during off-hour times so it's not bogging down the network," Van Uitert said. "We're making sure it's on the viewer before the radiologist sits down to read. Often there will be some kind of inconsistencies between the current image and prior studies — a difference in the name, for example — and we have services in background that are able to resolve those differences. Radiologists are going to receive the images that they need to read sooner." 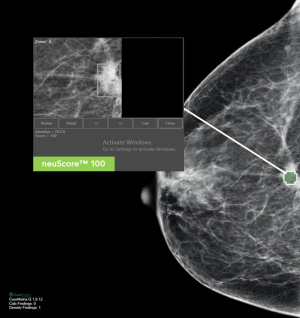 “While we have the product installed around the world and installed in the U.S., we didn’t want to bring it to market until we had an efficacy that was better than anything else out there,” said Kevin Harris, the president of CureMetrix. “It’s battling 20 years of CAD products that are not great.”

A reader study included 500 biopsy-confirmed cancer cases, going back six years to earliest actionable incidence of cancer. The doctors read each case twice. The first time they did it without cmAssist and noted their findings. They came back a month later and turned on cmAssist.

Using cmAssist improved the performance of the seven radiologists who participated by 27% and they were able to confirm a third more cancers and had no increase in recall rates.

The clinical trial for FDA clearance of the product will have “considerably” more doctors and cases, Harris said. “However, since the previous study was on the most difficult cases we could find, and our performance was outstanding, we fully expect our pivot study to demonstrate an efficacy and thus utility in the market far exceeding any competitive product.”

“These two products go together hand in glove,” Harris said.

Harris says the cmTriage product — which pre-processes and triages radiologists’ mammography worklists, will be key to process the backlog of mammograms that are not taking place during the COVID-19 pandemic.

"When doors open up again, clinics are going to have a flood of patients," Harris said. "There are 3 million mammograms per month that have been deferred during this crisis and cmTriage will allow them to prioritize those patients and get the most suspicious cases to the front of the list."
1
2(current)
3
4
5
6
7
8

Vaccine side effect may result in misleading mammography results

Hologic and Google Cloud to collaborate on digital diagnostic capabilities