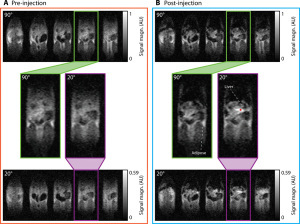 The use of SPIONs as contrast agents amplifies the magnetic field of low-field MR systems by 3,000 times to allow for higher-quality medical images.
A new generation of low-field MR systems is becoming more common in hospital settings where they are primarily used in neuroICUs to assess critically ill patients on devices such as ventilators, and who cannot be as easily transported to MR rooms. The 0.064 T devices are portable and range from $50,000 – $100,000 — making them significantly cheaper than the $3 million or more price tags attached to standard 1.5 T and 3.0 T systems.

Despite their advantages, these systems have lower magnetic fields and therefore, produce images with weaker quality than the standard systems. Even the use of gadolinium as a contrast agent is a no-go, due to debates around its long-term toxicity and the fact that these low-field MR scanners require 1,000 times the approved amount by the FDA.

This may change soon, following an investigation by researchers at Massachusetts General Hospital and the University of Sydney in Australia into the use of SPIONs for such scans. Short for superparamagnetic iron oxide nanoparticles, SPIONs are FDA-approved for treating certain cases of anemia, and have been proved to be safe. They are also 3,000 times more magnetic than conventional MR contrast agents, a fact that the researchers assert makes them ideal for low-field scanners, as they can amplify their magnetic fields.

“There do not exist contrast agents that perform well enough at low magnetic fields,” physicist Matthew Rosen, director of the Low-field MR and Hyperpolarized Media Laboratory at the MGH Martinos Center for Biomedical Imaging told HCB News. “Adding contrast to low magnetic field scanners allows the full gamut of the type of scans that people do with high-field. It's a very standard workflow of an oncologist who is trying to study the progress of some brain cancer. They would say, ‘let’s order these imaging sequences, plus contrast.’ And so the plus contrast part is something you can now do at low field.”

Physicists David Waddington, the lead author of the study, and Zdenka Kuncic, both from the University of Sydney, tested their approach in a trial involving healthy lab rats that were scanned with Rosen’s homemade ultra-low-field MR scanner. Each subject was given an initial scan without the contrast agent and another with it. Images from both scans were compared, with kidneys, liver and other organs in the contrast-enhanced scan glowing more brightly than in the non-contrast one.