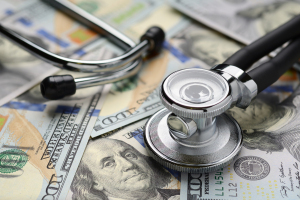 That’s just one of the potential circumstances they could see themselves in, according to a new analysis by Kaufman, Hall & Associates. Further, half of all hospitals would operate in the red under such circumstances.

“Heading into the COVID-19 crisis, the financial health of many hospitals and health systems were challenged, with many operating in the red,” said Rick Pollack, AHA president and CEO in a statement. “As today’s analysis shows, this pandemic is the greatest financial threat in history for hospitals and health systems and is a serious obstacle to keeping the doors open for many.”

Prior to the pandemic, hospital margins were a modest 3.5%. A number already had negative margins, an indication of the vulnerable economic state of the healthcare industry.

While funding provided to the CARES Act enabled hospitals to avoid margins as low as -15% in the second quarter, many can still expect to see margins at -3%. In the most optimistic scenario, in which cases decrease slowly, median margins could be -1%. Should periodic surges similar to the current climate increase, margins could sink to -11%.

Any of these scenarios would undermine the ability of hospitals to serve their communities. Another report by Kaufman, Hall & Associates predicted when COVID-19 first hit that almost half of hospitals in America would have negative margins in the second half of the year. In addition, the AHA estimated that lower patient volumes from July to December would result in $120.5 billion in losses, or an average of $20.1 billion in losses per month. It previously estimated in May that losses for hospitals and health systems could amount to $202.6 billion, bringing the total estimated losses to at least $323.1 billion in 2020.

Without further support from the government, such circumstances could become the reality according to the current analysis, even if COVID-19 recedes.

“While we appreciate the support from the administration and Congress, we need further help to stay afloat to continue our mission of caring for patients and communities,” said Pollack.