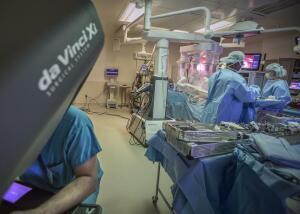 Researchers at Cedars-Sinai in Los Angeles have found that better long-term survival outcomes are associated with patients who have early-stage, oropharyngeal squamous cell cancer and receive transoral robotic surgery compared to manual operations.

“There are several theoretical ways that robotic surgery could be beneficial for oropharyngeal cancer patients including enhanced ergonomics, improved visualization, and the ability to remove the tumor in one piece through minimal invasive techniques,” Dr. Anthony Nguyen, MD, Ph.D., a resident in the department of radiation oncology at Cedars-Sinai, told HCB News. “It is possible that these advantages translate into better outcomes in this cancer, given that local recurrence is a major driver of long-term survival. Robotic surgery appears to be an effective treatment for oropharyngeal cancer that is at least comparable to older techniques.”

A minimally-invasive procedure, transoral robotic surgery involves a surgeon using a computer-enhanced system to guide an endoscope. The system consists of a flexible tube with a light and camera attached to it. They help provide high-resolution, 3D images of the back of the mouth and throat, an area that is difficult to reach with conventional tools. Two robotically guided instruments act as a surgeon’s arms and work around the corners to safely remove the tumor from surrounding tissue.

The retrospective, observational study used data from the National Cancer Database, including 9,745 surgical patients. Of this number, 2,694 underwent transoral robotic surgery between 2010 and 2015. Five-year overall survival for these patients was 84.5%, compared to 80.3% for those who had non-robotic surgery, after adjusting for differences in health and other characteristics of the two patient groups.

The researchers also saw the proportion of patients undergoing transoral robotic surgery for early-stage oropharyngeal cancer rose following the FDA’s approval of the surgery for the cancer in 2009, from 18.3% in 2010 to 35.5% in 2015. They also saw the number of facilities performing the robotic procedure during this same time more than doubled, from 6.3% to 13.9%.

“Our study suggests that robotic surgery is an effective treatment, but only a randomized study can determine if it is truly superior to other forms of surgery and whether it is a cost-effective approach,” said Nguyen. “There is also a need for randomized trials of robotic surgery-based approaches to radiation-based approaches, which are ongoing. Lastly, clinical trials exploring whether robotic surgery can allow reduced intensity post-operative therapy (e.g. radiation and chemotherapy) for HPV-associated oropharyngeal cancers are ongoing. All of these approaches are important to understand how to best utilize robotic surgery in oropharyngeal cancer treatment paradigms.”