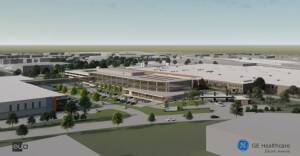 The sale will include 10 parcels and is part of a strategic decision to move operations to its West Milwaukee and Wauwatosa facilities, where it plans to invest $50 million to ramp up medical imaging production, reports the Milwaukee Journal Sentinel.

"Some moves will begin as soon as safely feasible. If, after required bargaining with unions, we make a final decision to move manufacturing and related work, all proposed moves would be completed in two or more years," Benjamin Fox, director of global communications at GE Healthcare, told HCB News.

The company uses the 561-acre campus primarily for its MR, CT and X-ray businesses, according to the Milwaukee Journal Sentinel. It announced its intention in September to sell the campus, with the intent being to create a global showcase for CT wing-to-wing manufacturing and engineering at the West Milwaukee and Wauwatosa facilities.

It plans to move roughly 1,500 employees from its offices and plant in Waukesha over a period of several years, though the MR unit and 600 GE employees at the Waukesha campus will remain at the campus, reports NBC-affiliate, TMJ4.

The campus was built in 1973 and offers 1.2 million square feet of space at the intersection of Interstate 94 and Wisconsin Highway 16. It holds parcels in the city of Pewaukee and the city of Waukesha and comprises seven buildings of which 53% are for dedicated office use and 47% for industrial use, according to a listing from real estate company, CBRE. It also has over 3,000 parking spaces on site, a fitness center and extra space for future developments.

While no sales price was listed by CBRE, the 10 parcels for sale are estimated to be over $45 million, according to Waukesha County tax records.

"Even if we move forward with this proposal, several of its business’ leadership hubs are and will remain in Wisconsin, including CT, MR, X-Ray, Life Care Solutions, General Imaging Ultrasound and others, as well as manufacturing, engineering and supply chain teams, and more," said Fox.