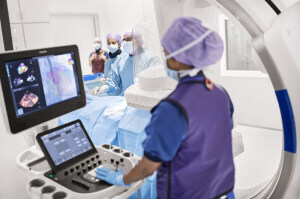 Different devices chosen by doctors can create variations in cost for performing the same interventional radiological procedure
Common imaging-guided procedures can be completed with a number of medical devices. The choice of one device over another, however, can create cost variations for the same operation, say researchers at Stanford University.

The scientists looked at nine radiologists and expendable items they used in nearly a dozen different interventional radiology procedures and saw high variability from one type of treatment to the next. Radioembolization administration, for instance, had a nearly 57% coefficient of variation rate.

"Significant differentials in cost for devices meant to achieve the same outcome (for example microcatheters), clearly increase the cost to the hospital, and those costs are ultimately/eventually/indirectly passed down to the consumer and/or taxpayers. More importantly, the price tag attached to some devices is based on theoretical advantage but remains to be validated in real life data," corresponding author Dr. Nishita Kothary, an IR professor with Stanford University Medical Center, told HCB News.

Radioembolization administration had the highest variation at 56.6%, while transjugular liver biopsy had the lowest at 4.9%. Variation in transarterial chemoembolization costs were due to different microcatheters or microwires, while wire choice increased spending by up to twofold in nephrostomy. Mean expenditures by the radiologists were not significantly correlated with case volume.

Hospitals attempt to recruit physicians by promising them a choice in medical devices. This can be a strain due to supply chains accounting for 30% to 40% of a hospital’s expenses and physician preferred items making up 50% to 60% of those items. Dr. Jimmy Chung, associate vice president of preoperative portfolio at Providence St. Joseph Health, recently said at the AHRMM virtual meeting that this lack of standardization is wasteful.

“Waste and unnecessary variation leads to inefficiency, medical errors and excessive costs,” he said. “Hospitals should stop promising choices based on preference when recruiting physicians and instead focus on quality, efficiency and evidenced-based practices.”

To create a standardized approach, Kothary suggests avoid individualized preferences, reducing par levels and having items on consignment, and make equipment decisions based on good clinical data and studies. "Just because its new, doesn’t make it more effective."

The findings were published in the Journal of Vascular and Interventional Radiology.