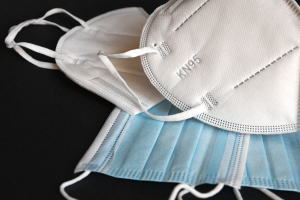 James “Barry” O’Shaughnessy, manager of procurement for South Shore Health, said he knew “something was off” with an order of 30,000 masks he placed when they arrived and he looked through them, according to the Associated Press.

“The labels on the boxes were placed differently than other shipments,” O’Shaughnessy said in a statement. “And the plastic bag inside the boxes had a strange seal.”

Sending photos of the products to 3M, the supposed makers of the masks, with a representative confirming O’Shaughnessy’s suspicion that the masks were counterfeit.

The masks were found to have not come from an authorized 3M distributor. The Department of Homeland Security seized them and is now looking into the matter.

“Barry’s deep experience and keen attention to detail helped protect thousands of South Shore Health employees from wearing counterfeit masks that would put them at risk,” said South Shore president and CEO Dr. Allen Smith. “We are grateful for his watchful eyes and dedication to the safety of our colleagues.”

Counterfeit masks and PPE have been a major challenge throughout the pandemic, with high demand leading to shortages in resources and causing financially strapped healthcare systems to fall prey to scams in an effort to protect their staff workers. U.S. authorities previously made over 500 seizures and 11 arrests last year in connection to a Los Angeles shipment of masks. The masks came from a Chinese factory called Shanghai Dasheng and had ear loops — a fact that the CDC issued an alert on, saying that any such masks from the company were fake.