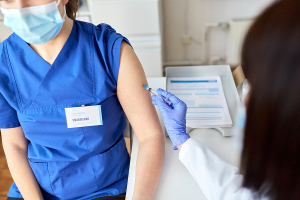 The decision makes it the first federal agency to mandate the vaccine and will see the immunization of one of the largest healthcare systems in the U.S. Some experts see this as the beginning of a nationwide trend for such requirements, according to the Washington Post.

“I fully expect more health care employers — health systems, long-term care companies, pharmacies and others — will mandate their employees get vaccinated,” Ezekiel Emanuel, a bioethicist at the University of Pennsylvania who organized a joint statement from nearly 60 medical groups, told The Washington Post. He added that the country “will be better off for it.”

Among the medical groups who helped craft the joint statement were the American Medical Association, the American Society for Radiation Oncology (ASTRO) and the Society of Interventional Radiology, among others. Together, they assert that healthcare professionals must ethically do all they can to protect patients, especially as highly contagious variants, including the Delta variant, increase COVID-19 cases, hospitalizations and deaths. “Vaccination is the primary way to put the pandemic behind us and avoid the return of stringent public health measures,” they said in their statement.

Despite having priority access to vaccines, many healthcare workers have not received it, reports The Washington Post. An analysis by WebMD and MedScape Medical News released last month estimated that 25% of hospital workers who had contact with patients had not been vaccinated by the end of May.

The White House has opted not to impose national mandates but says it supports private employers that create new requirements for their workers. Hospitals, however, have stopped short of imposing vaccination mandates out of fear that doing so could risk lawsuits or staff defections. Fewer than 9% have required workers to get vaccinated, as of last Thursday, according to the American Hospital Association.

The VA’s requirement applies to more than 100,000 frontline workers. It was not the only vaccination mandate made Monday. New York City and the state of California also announced plans to require workers to get the vaccine or face mandatory testing. For New York, this applies to teachers, police officers and the rest of the 340,000 city employees by mid-September, while California’s mandate includes all state and health care employees to have evidence of vaccination by August 2, reported USA Today. The two are the most populous city and the most populous state in the nation, respectively. Those who wish not to in either location will have to wear a mask in addition to undergoing weekly testing.
1(current)
2