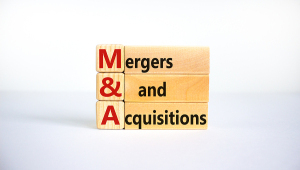 The third quarter of 2021 continued to see fewer M&A deals but with larger-than-average seller size
Despite only seeing seven mergers and acquisitions in the third quarter of 2021, the hospital and healthcare provider industry is expected to take home $5.2 billion in total transacted revenue from those deals.

All seven included 20 hospitals, with two being mega-mergers, in which the smaller party or seller had average annual revenues surpassing $1 billion. Also observed in the second quarter, the trend indicates that larger hospitals are looking for partners to help prop up their finances in the face of the ongoing pandemic, according to Kaufman Hall’s latest analysis.

Additionally driving the trend is the desire among hospitals and health systems to break into new markets and add on new capabilities, as well as increase their scale and grow their presence in markets where they currently have a stake. As a result, choices of whom to merge with or acquire have become more selective.

While smaller in number, a high percentage of transactions are those with seller revenues of more than $500 million, according to the report. Average seller size by revenue year-to-date was $659 million, which was more than double the average of $329 million between 2015 and 2020, according to Becker’s Hospital Review. Total transacted revenue for 2021 is currently $22.4 billion and is close to those from previous years, despite there being fewer transactions.

One of the two megamergers was that of Intermountain Healthcare and SCL Health into a 33-hospital system with $11 billion in revenue. The other was between NorthShore University HealthSystem and Edward-Elmhurst Health into a nine-hospital system with $4 billion in revenue. While not a megamerger, another large acquisition was HCA Healthcare's purchase of five hospitals from Steward Health Care.
1(current)
2