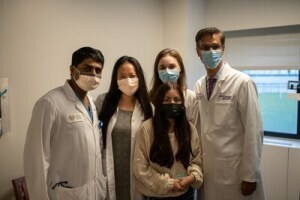 The severity of the girl’s CF irreversibly damaged her organs and made her viable for the double transplant. The procedure took place back in May and was the first-ever pediatric lung transplant performed at NYU Langone Health.

"We delivered a successful intervention when time was running out. "This was possible due to our team's position at the forefront of innovative approaches to meet the demand for available lungs combined with a multidisciplinary team including pediatric surgery expertise from Dr. Kumar,” said Dr. Stephanie Chang, surgical director of NYU Langone's lung transplant program, in a statement.

Dr. T.K. Susheel Kumar is a pediatric lung and heart surgeon at Hassenfield Children’s Hospital who performed the procedure alongside Chang on the patient, who goes by the name Alejandra.

Born with CF, she was admitted in September 2020 to see if she was a viable candidate for a transplant. Doctors told her in April she did not have long to live and placed her on the transplant waiting list. Despite waiting time for pediatric lung transplants typically spanning four to six months, a donor became available five weeks later for Alejandra. Upon waking up from surgery, she was able to breathe more easily and remained in the hospital for nine days before she was discharged.

"The second I woke up after surgery, I already felt a tremendous difference. I am so thankful for the gift of life. I can finally breathe with ease again. For me, receiving my new lungs is a miracle," said Alejandra.

CF affects more than 30,000 Americans and is among the most common pediatric lung diseases. With no cure, patients often rely on various treatments to relieve symptoms and reduce risks for complications. Lung transplant is an option for select individuals like Alejandra who have severe CF-related lung disease, and others with end-stage lung diseases, to improve their quality of life. "Organ transplantation offers a great promise for children with end-stage lung disease. Our primary goal is to foster a successful transplant and in doing so, provide new lungs for a child and get them back to their active lives," said Dr. Eleanor Muise, assistant professor in the department of pediatrics and pediatric pulmonologist at Hassenfeld Children's Hospital.

Also a respiratory illness, COVID-19 can have a devastating effect on lungs. Just last year, Vanderbilt University Medical Center performed what it claimed was the first dual heart-lung transplant on a COVID-19 patient in the world. The man had cardiomyopathy and the virus damaged his lungs and may have contributed further damage to his heart. He was reported to be doing well following his procedure.

Transplants during the pandemic, however, can be risky, with one Michigan woman dying in February after contracting COVID-19 from a double lung transplant she received from an infected donor who showed no signs or symptoms of the virus. Officials at the University of Michigan Medical School say it may be the first proven transmission of COVID-19 via an organ transplant in the U.S.